Scientific name: Liparis montagui
Although, commonly referred to as a ‘sea snail,’ this species in fact belongs to the fish family!

Up to 6cm long, usually much smaller.

Montagu’s sea snails often feed on small crustaceans and use a modified pelvic fin or ‘sucker’ to cling rocks and seaweed. Which is where it is often found!

This small fish resembles a large tadpole, with a large head and tapering tail, which can often be seen curled up under its chin. Colour is usually olive brown.

Found around the British Isles and North Sea.

This fish has no scales, but instead has skin, covered in tiny prickles!

Always follow the Seashore Code when rockpooling, be careful to leave everything as you found it - replace any rocks you turn over, put back any crabs or fish and ensure not to scrape anything off its rocky home. If you want to learn more about our rockpool life, Wildlife Trusts around the UK run rockpool safaris and offer Shoresearch training - teaching you to survey your local rocky shore. The data collected is then used to protect our coasts and seas through better management or through the designation of Marine Protected Areas. 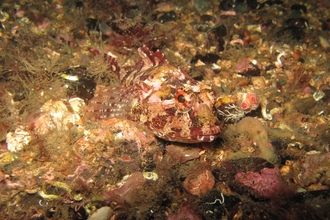 Masters of disguise, this species exhibits one of the best examples of camouflage you will find on the seashore! 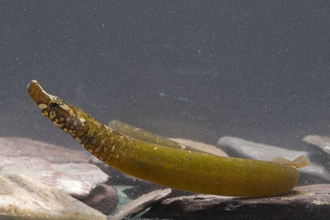