How to identify gulls

Gulls are members of a large, widespread family of seabirds. Often known as seagulls (though no species is actually called a seagull, and many are found far from the sea), they sometimes get a bad reputation for stealing chips. But gulls are intelligent, adaptable and often beautiful birds.

However, they're notoriously difficult to identify. Entire books have been dedicated to telling one gull from another, but even these barely scratch the surface. Their plumage changes as they age and there's a great deal of variation within species. This page is just a taster, highlighting the key features to look for, mostly in adult gulls.

Which gulls am I most likely to see?

The stereotypical gull. Adults are told from most gulls by their large size, pale grey upperparts and pink legs. In summer they have a white head, which develops dark streaking in winter.

Similar size to a herring gull, but often slightly smaller. Adults are recognised by their slate-grey upperparts (contrasting with blacker wing-tips) and bright yellow legs.

Like a much smaller, cuter version of a herring gull. Adults have pale grey upperparts, yellow-green legs, a dark eye and a thin yellow bill. The legs and bill are duller in winter, when the head is streaked grey.

Smaller than most gulls in the UK. Adults have pale grey upperparts and dark reddish legs and bill. In summer the head is dark brown (not actually black!). In flight, look for a distinctive white leading edge to the wing, visible at some distance.

In winter the head is mostly white, with dark smudges on the ears and above the eyes. The bill also develops a dark tip.

Rarely found away from the coast. Slightly larger than black-headed gull, with dark grey upperparts (paler towards the wing tips), a bright yellow bill and black legs. The solid black wing-tips lack the white spots of common gull.

Slightly larger than the similar black-headed gull, but adults distinguished by paler upperparts, scarlet bill and legs, white wing-tips and jet black hood (rather than brown) in summer. In winter they have a dark mask stretching behind the eye.

A winter visitor. Iceland and glaucous gulls are the only large gulls with whitish wing-tips (at all ages). Compared to glaucous, Iceland gulls are smaller, with a thin bill, small head and large eye that conveys a gentle impression.

A winter visitor. Compared to Iceland gull, glaucous gulls have a heavier build, with a larger bill and smaller eye, which can give them an aggressive expression.

Extremely similar to herring gull, with which it can easily be confused. When the adult's bright yellow legs aren't visible, look for a strong bill with a large red spot (often extends to the upper mandible) and a slightly darker back. In autumn/winter, the head is usually less streaked than herring.

Even smaller than a black-headed gull, with a small, dark bill. Adults have pale grey upperparts, dark underwings and white wing-tips. In summer they have a black hood, but in winter just a black cap and ear spot. 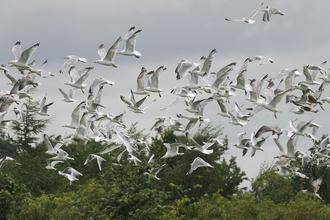 Where to see a gull roost

In winter, gulls gather in huge numbers to spend the night on lakes and reservoirs. Here are some of our top spots for seeing a gull roost. 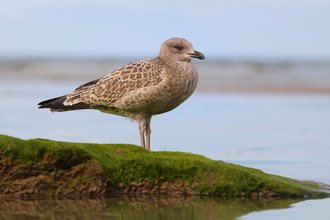 Many seabirds have declined dramatically in recent years. Join your Wildlife Trust and help wildlife recover and thrive on land and at sea. 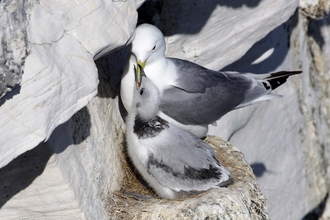 The UK is famous for its seabird colonies. Here are some of our best reserves for getting close to kittiwakes, puffins and other seabirds.