The UK is home to one native hornet: the European hornet. This page provides comparison images to help you know how to tell apart these hornets from invasive Asian hornets (sightings of which should be reported), and a few similar-looking, but harmless and important UK species - especially the hornet moth (Sesia apiformis) and the hornet mimic hoverfly (Volucella zonaria). Below are comparison images to help you distinguish between the species.

All Asian hornet sightings should be reported. More information below.

When is a hornet not a hornet?

Some other insects have cottoned on to the fact that these striped predators inspire fear, and use this to their advantage by copying them in appearance; a clever strategy to give the impression of danger, while in fact being completely harmless!

Hornet moths (pictured) and the similar Lunar hornet moth are clearwing moths - a group known for their mimicry of hymenoptera (a group of insects that includes bees, ants and wasps). A second glance reveals some giveaway features:

The non-native Asian predatory wasp, Vespa velutina (also known as the Asian hornet), is an invasive species from Asia. In September 2016, the National Bee Unit confirmed a sighting of the Asian hornet in the Tetbury area of Gloucestershire - this is the first time the hornet has been discovered in the UK. Further UK sightings were made in 2017 and 2018, most recently in Cornwall.

Preying on insects, including honey bees and other pollinators, it is a significant threat to bee colonies, and other native species in the UK. They are most likely to be seen near bee hives, preying on bees defending the hive.

How did they get here?

The hornet can be accidentally imported through goods such as timber, soil, fruit, potted plants, cut flowers, though it is most likely to found in the southern parts of England as it cannot survive the colder climates in the north of the UK. Its active months are between April and November, though they're most active in August/September.

If you see an Asian Hornet

Never disturb an active nest. Sightings of the Asian Hornet should be reported through the Asian Hornet Watch app, through an online form or emailed to the Non-Native Species Secretariat with a photograph and location details.

You can find more information about this species alert and further Asian hornet resources on the NNSS website, including the app, alert posters and information sheets. 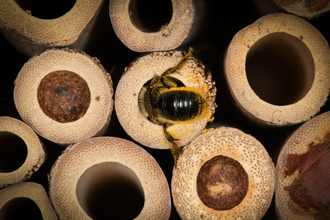