Scientific name: Urocerus gigas
With yellow-and-black bands, the giant horntail looks like a large wasp, but is harmless to us. The female uses her long, stinger-like ovipositor to lay eggs in pine trees, where the larvae then develop.

Length: up to 4cm

The giant horntail is a massive sawfly that is also known as the 'giant woodwasp' or 'greater horntail wasp'. A relative of the wasps, the female is black and yellow and has a long, stinger-like tail that is actually her ovipositor, which she uses to lay her eggs into wood, particularly pine. The larvae live in the wood of pine trees, where they spend up to five years developing. Found near pine woods, or places where pine timbers are used.

The giant horntail is a black-and-yellow-banded insect that looks like a large wasp, so may be confused with the hornet or hornet robberfly. The female has a long ovipositor at the end of her body, which looks like a stinger.

Despite its fearsome appearance, the giant horntail is harmless. However, the length of time the larvae spend in wood does result in the adults sometimes emerging from harvested timber used for building or even furniture. 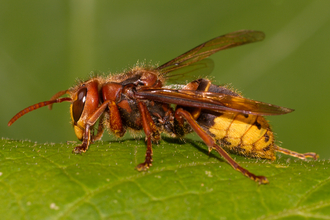 How to identify a hornet, and recognise the non-native Asian hornet 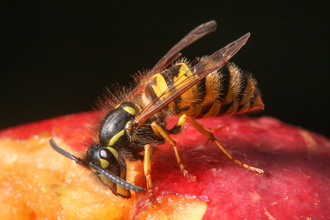 Wasps are well-known, and unfortunately not very well-loved! But give these black and yellow guys a chance, as they are important…