Scientific name: Volucella zonaria
With black-and-yellow markings, the hornet mimic hoverfly looks like its namesake, but is harmless to us. This mimicry helps to protect it from predators while it searches for nectar.

At almost 2cm long, the hornet mimic hoverfly is the largest hoverfly species in the UK. As its name suggests, it is an excellent mimic of the hornet, but is harmless to humans. Only a very rare visitor to the country up to the 1940s, it has become more common in Southern England in recent years, and is still spreading northwards, perhaps as a result of climate change. It is particularly prevalent in urban areas. The adults are migratory and the larvae live inside wasps' nests.

The hornet mimic hoverfly is mainly orangey-yellow on the abdomen, with dark bands and a dark brown thorax. It is our largest hoverfly. It can be distinguished from the hornet by its much larger eyes, broader body and the lack of a sting.

Many species of hoverfly mimic bees and wasps with their markings in order to gain some protection from predation. The hornet mimic hoverfly is also known as the 'belted hoverfly'.

How to identify a hornet, and recognise the non-native Asian hornet 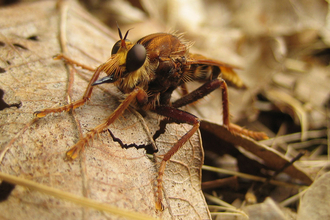 With black-and-yellow markings, the Hornet robberfly looks like its namesake, but is harmless to us. This mimicry helps to protect it… 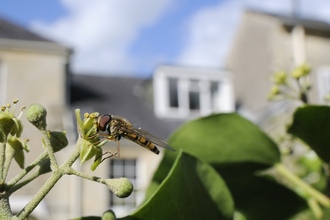 Take action for wildlife in your garden