Scientific name: Drosera rotundifolia
The carnivorous lifestyle of the Round-leaved sundew makes this heathland plant a fascinating species. The round leaves have sticky, 'dew'-covered tendrils that tempt in unsuspecting insects as prey.

The Round-leaved sundew is a strange and beautiful plant that can be found sitting among the soggy Sphagnum mosses at the shores of bog pools, on wet heaths and peaty moors. A tiny, slender plant, it stands out from the crowd because of its diet. Hair-like tendrils on each reddish leaf are tipped with glistening droplets that attract passing insects. But this 'dew' is very sticky, trapping the insect; the sundew's tendrils detect the presence of its stuck prey and curl inwards to engulf it. Eventually, the whole leaf wraps around the insect which is digested. The acidic habitats the Round-leaved Sundew lives in don't provide enough nutrients, so it has evolved this carnivorous way of life to supplement its diet.

Common in Scotland, Northern Ireland and Wales. Found in England, but mainly in the South West and North West.

The 'dew' of Round-leaved sundews once formed the basis of anti-ageing potions as people believed it was a source of youth and virility - the sundew itself glistening and moist even in the most fierce sun. Later on, the plant was also used as a love charm because of its power to lure and trap helpless insects.

The Wildlife Trusts are working to restore and protect our heathlands by promoting good management, clearing encroaching scrub and implementing beneficial grazing regimes. This work is vital if these habitats are to survive; you can help by supporting your local Wildlife Trust and becoming a member or volunteer. 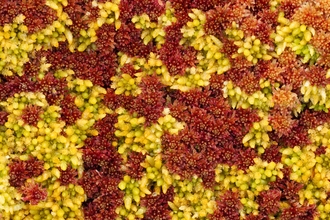 Sphagnum mosses carpet the ground with colour on our marshes, heaths and moors. They play a vital role in the creation of peat bogs: by…