Nationally scarce and globally vulnerable. Here in the UK, the pink sea fan is protected under the Wildlife and Countryside Act 1981. It is also a Priority Species under the UK Post-2010 Biodiversity Framework and a Feature of Conservation Importance for which Marine Conservation Zones can be designated. The pink sea fan is classified as Vulnerable on the global IUCN Red List.

Pink sea fans are a type of horny coral known as a "gorgonian". Each sea fan is a colony of individual animals, or polyps, that share a hard skeleton. They live affixed to rocky surfaces under the sea, often at right angles to the current to make the most of the food passing by; as the anemone-like polyps use their stinging tentacles to catch plankton from the water column. Most pink sea fans grow to a height of around 25cm, but some have been recorded at a whopping 50cm tall and 1m across - not bad when you consider how slowly they grow! Pink sea fans also provide a home to other sea creatures, including the rare sea fan anemone and a sea slug that actually feeds on its sea fan host.

Sea fans form branching fan shaped colonies affixed to rocks. Their branches are covered in warty protuberances from which the small anemone-like polyps emerge. Colonies may be up to 50 cm high but are more often up to 25 cm. Although known as the pink sea fan, they can vary in colour from white to orange to deep pink.

In Britain, the pink sea fan is restricted to South West England and South Wales. Found in shallow waters between 10 and 50m deep.

Pink sea fans grow incredibly slowly - only 1cm a year - so the largest sea fans may be over 50 years old!

Pink sea fans are fragile and easily dislodged. When diving with sea fans, be careful not to kick or catch sea fans and report any examples of badly damaged or entangled sea fans to your local Wildlife Trust.
One of the main threats to sea fans is from scallop dredgers. Scallop dredging has the most severe ecological impact of any fishing type in the UK, destroying seabed habitats as the heavy toothed dredging gear penetrates up to 10cm into the seabed. It is kills not only sea fans, but destroys fragile Maerl beds and other biogenic reefs too. It's easy to avoid this impact - simply choose diver-caught scallops. The sea fangles washing up on our beaches are showing the extent of marine debris in our seas - from balloons and household rubbish to fishing nets and line.
We can all play our part in solving this issue: disposing of all rubbish correctly, recycling what we can or joining in on a beach clean to remove litter and discarded fishing gear. If you are diver, consider joining a subtidal clean up where litter is removed from the seabed. Balloon litter is an increasing threat to our marine wildlife, so say no to balloon releases and choose a more sea-friendly alternative for events, celebrations or memorials. 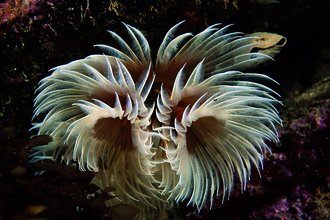 Worms in the sea are anything but dull and this fan worm, resembling a Catherine wheel, is a perfect example of the intricate beauty… 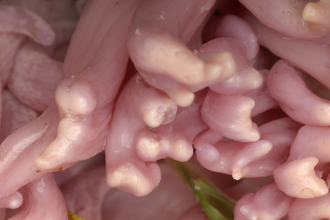 The branching, finger-like projections of this fungus give it the appearance of an underwater coral. Its striking colour and form make…