Scientific name: Boloria selene
The small pearl-bordered fritillary is a pretty orange-and-brown butterfly of damp grassland, moorland, and open woodland. It gets its name from the row of 'pearls' on the underside of its hindwings.

The small pearl-bordered fritillary is widespread and sometimes abundant in Scotland and Wales, but has undergone severe declines. It occurs in damp, grassy habitats, as well as in woodland clearings and on moorland. The adults fly low to the ground using a flutter-and-glide pattern, stopping to nectar at bramble and thistle flowers. The caterpillar feeds on violets, typically common dog-violet and marsh violet.

Mainly found in western areas of the UK, with strongholds in Scotland, Wales and South West England.

The small pearl-bordered fritillary first emerges in southwest England in May. The timing of emergence moves gradually northwards, and it does not appear until June in Scotland. Its early appearance in the south means a second brood is possible. 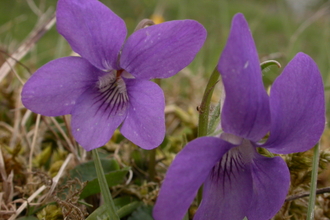 Our most familiar wild violet, the Common dog-violet can be spotted in a range of habitats from woodland to grassland, hedgerows to… 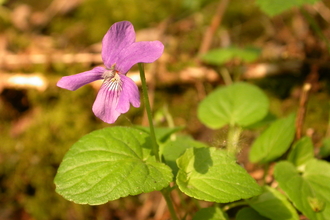 As its name suggests, the Marsh violet likes damp spots, such as marshes, bogs and wet woods. It is a low-growing plant with kidney-… 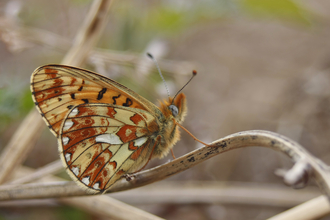 The pearl-bordered fritillary is a striking orange-and-black butterfly of sunny woodland rides and clearings. It gets its name from the…