Scientific name: Boloria euphrosyne
The pearl-bordered fritillary is a striking orange-and-black butterfly of sunny woodland rides and clearings. It gets its name from the row of 'pearls' on the underside of its hindwings.

The pearl-bordered fritillary is a striking orange-and-black butterfly, often seen flying close to the ground along sunny woodland rides or feeding on spring flowers such as common dog-violet. It can also be found in habitats with a mosaic of grass, bracken and scrub. It is the earliest fritillary to emerge in April and may even have a second brood if the weather is good. The female lays single eggs in bracken or leaf litter close to violets, the foodplant of the caterpillars.

Found in scattered locations in southern England, Wales and Scotland.

Caterpillars overwinter wrapped in a leaf at the base of a foodplant; when they emerge, they are half the size they were the previous summer. 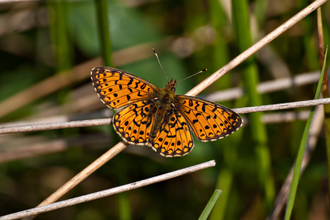 The small pearl-bordered fritillary is a pretty orange-and-brown butterfly of damp grassland, moorland, and open woodland. It gets its… 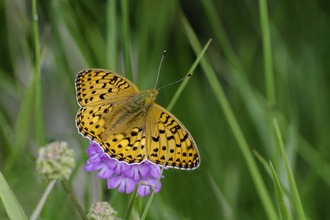 The dark green fritillary is actually an orange butterfly with black spots. It gets its name from the dark green hue to the undersides… 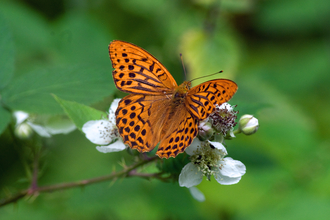 The silver-washed fritillary gets its name from the silver streaks on its underside. It is on the wing in summer, preferring sunny…