Scientific name: Philaenus spumarius
In spring and summer, look out for 'cuckoo-spit' - the frothy mass of bubbles that appears on plant stems everywhere. This is actually the protective covering for the nymphs of the tiny common froghopper.

You might not be able to identify a common froghopper outright, but it is likely that you are familiar with the protective, frothy mass of bubbles that houses the nymphs in spring and summer: known to many of us as 'cuckoo-spit'. The adult is a champion jumper and is able to leap 70cm into the air - a greater feat than the flea and similar to a human jumping over a tower block! Adults mate back-to-back, and the subsequent nymphs go through a number of stages. Both adults and nymphs feed on plant sap using specialised, sucking mouthparts.

The tiny adult common froghopper is very variable in pattern from black and white to many shades of brown; the nymph is green and lives in 'cuckoo-spit' - a frothy mass found on grass and plant stems. The adult holds its wings over its body, making it look like an elongated oval. This is just one of many species of froghopper in the UK, which are very difficult to tell apart.

The initial stages of the jump of the common froghopper are so powerful that a G-force of over 400 gravities is generated; in comparison, an astronaut rocketing into orbit experiences a G-force of 5 gravities. Such amazing force is possible due to the common Froghopper's powerful hind legs. 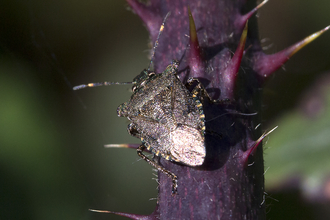 Unlike many of its relatives, this shimmering shieldbug is a predator, feasting on caterpillars and a variety of other insects. 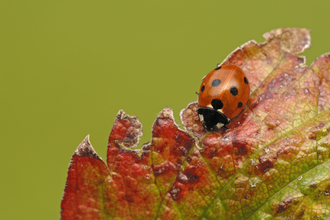 Insects can be the organic grower’s best friend. Whether pollinators or predators, they will help manage unwanted garden visitors and… 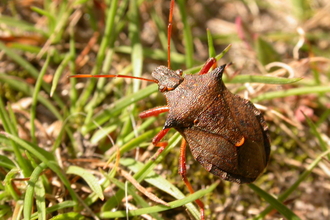 The spiked shieldbug has fearsome shoulder projections or 'spikes' and a predatory nature. This brown bug feeds on…