Scientific name: Sternula albifrons
Found around our coasts during the breeding season, the little tern is a diminutive seabird. Despite its size, it performs remarkable aerial courtship displays.

Living up to its name, the little tern is the UK's smallest tern and can be seen nesting on gravelly beaches in small colonies. It feeds just offshore, hovering above the water before diving in to catch its prey of small fish. A summer visitor to Europe, the little tern leaves in August to spend the winter in Africa.

Silvery-grey above and white below, the little tern has a black cap, a black eyestripe, and a white forehead. It has a short tail, tiny, yellowy-orange legs, and yellow bill with a black tip.

A summer visitor to gravelly beaches around the coast; large colonies are found on the east and south coasts of Scotland and in the north and east of England.

During their courtship, male little terns put on impressive aerial displays that involve carrying fish to attract mates. The females will chase them high up into the sky; the males then descending at a glide with their wings forming a 'V' shape.

You can help this little seabird by being careful not to disturb it when visiting nesting colonies. The Wildlife Trusts are working with fishermen, researchers, politicians and local people towards a Living Seas vision, where coastal and marine wildlife thrives alongside the sustainable use of the ocean's resources. Do your bit for our Living Seas by supporting your local Wildlife Trust. 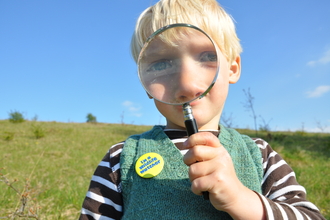 How to identify bird and butterflies in your gardens, tell the difference between native and Spanish bluebells, know your birds of prey… 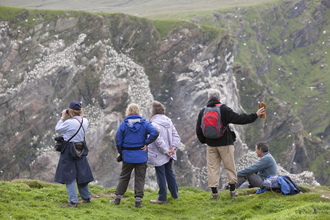 The UK's cliffs and coastlines are home to some of the most important seabird colonies in Europe. Grab your binoculars and see… 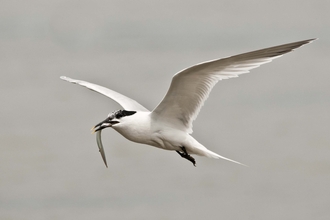 Found around our coasts during the breeding season, the large sandwich tern can be spotted diving into the sea for fish such as sandeels…