Scientific name: Larus fuscus
The lesser-black backed gull can be spotted around the coast in summer, with the biggest colony on Walney Island, Cumbria. Look for it over fields, landfill sites and reservoirs during winter.

The lesser-black backed gull can be seen on farmland, wetlands and around the coast. It is a large, elegant gull, just a little smaller than the herring gull. Like many gulls, it is omnivorous and often scavenges around rubbish tips and in urban areas. The entire world's population of this gull is found in Europe. A staggering one third of the UK's population can be found at Walney Island in Cumbria.

Gulls can be very difficult to tell apart, especially immature birds. Adult lesser-black backed gulls are dark grey above and white below, with a white head (streaky during the winter) and black wingtips with white spots. They have yellowy-orange legs.

Until recently, lesser-black backed gulls were only summer visitors to the UK, but now some are resident here all year-round. In the winter, they are joined by birds from Scandinavia, while those of our summer breeding birds that do still migrate spend their winter in Africa. 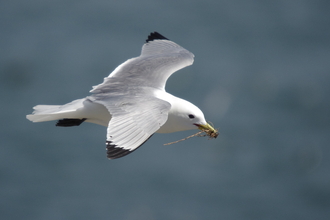 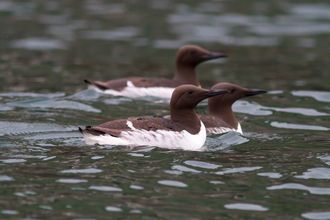 Guillemots really know how to live life on the edge – quite literally! They nest tightly packed on steep ledges and cliffs around the… 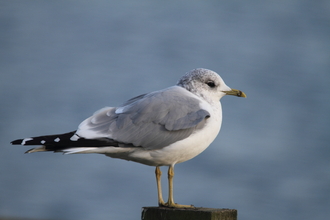