Scientific name: Columba palumbus
The large, plump woodpigeon is a familiar sight in our gardens and parks, but can also be found on farmland and in woodlands almost everywhere. You may hear its cooing call before you see the bird itself.

Common. Classified in the UK as Green under the Birds of Conservation Concern 4: the Red List for Birds (2015). Protected in the UK under the Wildlife and Countryside Act, 1981.

Our largest and most common pigeon, the woodpigeon is a familiar bird of gardens, parks, woodlands and farmlands right across the country. Its husky 'hoo-hroo' call is a well-known sound of the country. It feeds on seeds, leaves, grains, fruit, peas and root crops and can become a serious agricultural pest in certain areas. The woodpigeon makes flimsy twig nests in trees, in which the female lays two eggs. Both sexes incubate and raise the young, feeding them on 'pigeon milk' - a regurgitated, milky substance from a food-storage organ called a 'crop'.

Our largest pigeon, the woodpigeon is easily distinguished from the similar stock dove and feral pigeon by its pink breast, white neck patch and the white patches visible on its wings during flight.

As well as being a common resident, large numbers of woodpigeons migrate here from the continent in the autumn and winter.

Whether you live in town or country, you can help to look after garden birds by providing food and water for them. 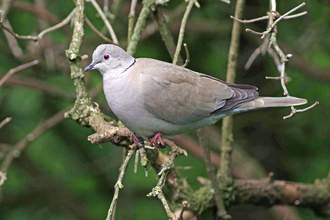 The collared dove is a pretty little pigeon that is a regular sight in our gardens, woodlands and parks. Listen out for its familiar… 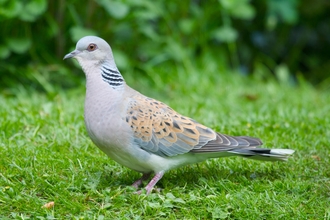 The turtle dove is the UK's fastest declining bird species and is on the brink of extinction. A small and pretty pigeon, it breeds… 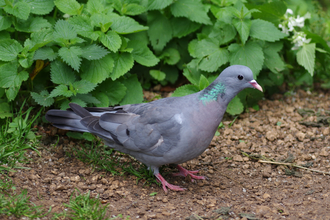 The stock dove looks very much like the Woodpigeon, but without the white neck and wing patches. It can be spotted in woodlands and… 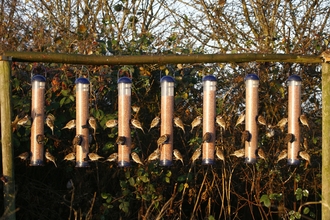 Buy your bird seed from Vine House Farm and support your local Trust. 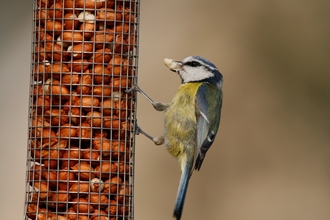