Major damage to River Lugg in Herefordshire will be test case for Government commitment to strengthen wildlife protection.

The River Lugg, in Herefordshire, one of the most beautiful and important rivers in the UK, has been intentionally destroyed over a stretch of approximately 1.5km with huge repercussions for wildlife downstream. Herefordshire Wildlife Trust has discovered that the river and its banks have been bulldozed, straightened and reprofiled into a sterile canal, with all bankside and riverside habitats completely obliterated.

The Lugg flows from its source in Powys through Herefordshire before meeting the River Wye just outside Hereford.  Its riverbanks, gravels and beds of water crowfoot are home to crayfish, otters and salmon, lampreys and dragonflies and a host of rare river wildlife. The river is so important for willdife that it is designated as a Site of Special Scientific Interest (SSSI), and as a Special Area of Conservation (SAC) in its lower reaches. This should give it multiple layers of protection, with statutory agencies such as Natural England, the Environment Agency, Forestry Commission and Herefordshire Council all given a statutory duty to protect the river from harm. 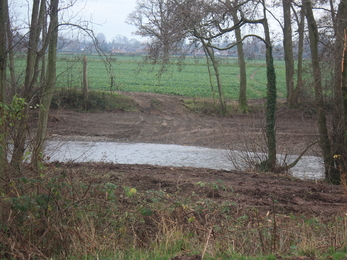 View of the bankside of affected River Lugg, Herefordshire 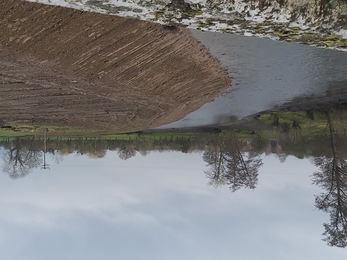 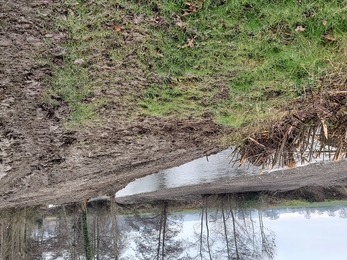 View of the clearance of the River Lugg © Herefordshire Wildlife Trust

“A large stretch of one of the UK’s most important rivers, the Lugg, has been devastated with dire consequences for wildlife and water quality downstream – this is a tragedy. The bankside trees are all grubbed out and burnt, the river gravels have been scraped away and the beautiful meanders of the river have been straightened and reprofiled.  As former leader of the English Nature rivers team which notified the Lugg as a Site of Special Scientific Interest, I know this river to be one of the most enchanting tree-lined reaches with immense value for wildlife.

“This is a crime against the environment. Swift action needs to be taken and we want to see the authorities investigate the matter swiftly. We expect this case to be dealt with in a serious and robust manner and any resulting prosecution should act as a deterrent to prevent anyone committing this type of crime ever again.  We will also be calling for restoration of the river to its natural channel.”

Herefordshire Wildlife Trust does not believe that the assault on the river was the work of an idle whim, requiring as it did the action of a 16-tonne bulldozer. The work would have been planned and will have had a considerable cost attached.  It is understood that landowners bordering this stretch of the river would have been well aware of the SSSI status of the river, suggesting a deliberate flouting of laws designed to protect our most precious wildlife. The Trust believes the action is a contravention of the Wildlife and Countryside Act and The Environmental Permitting (England and Wales) Regulations 2016 (as amended) and should have required consent from the Environment Agency, as well as planning consent, at the very least.

“The Government has promised to transform our environmental governance as we leave the EU and for the UK to be a world leader in environmental protection. Devastating incidents such as this one will be a vital 'test case' as we come to the end of the transition period for the Government's ambition to develop a 'world leading' environment enforcement structure.

“Unfortunately, the Government has so far failed to live up to this standard, with poor resourcing leaving Natural England unable to properly monitor and protect our most important wild places - Sites of Special Scientific Interest (SSSIs).  About 8% of land in England is currently protected as a SSSI, but around half are still in a poor state and suffering wildlife declines. This is a major issue and means that the Government is a long way off their commitment to protect 30 per cent of the UK’s land for biodiversity by 2030.

Herefordshire Wildlife Trust has fought for the protection and conservation of the Lugg and its floodplains for many years working positively alongside landowners, partner organisations and statutory bodies. Since 2015 they have administered farm grants funded by the Environment Agency and Natural England, to connect habitats and reduce diffuse pollution and river restoration works continue to be conducted throughout the lower catchment.

“The actions taken on this stretch of the river will have far-reaching consequences both for this stretch of river and floodplain and further downstream. Removing all bankside vegetation and scraping out the riverbed and banks will cause a huge increase in the speed the water moves through the river and increases the flood risk downstream. With no stabilising vegetation, any heavy rainfall and rise in river level and speed will mean massive erosion of the banks with a great amount of soil washed into the river along with agricultural pollutants such as phosphates and pesticides. This soil smothers the riverbed for miles, destroying fish spawn and invertebrates that inhabit it.”

While the Trust hope that prosecution will follow these actions, repairing the damage and restoring natural process and wildlife to this landscape will take decades.

View of the clearance of the River Lugg © Herefordshire Wildlife Trust

English waters among the least healthy in Europe, and climate change will make this worse