Scientific name: Matricaria discoidea
Pineappleweed is an introduced species that has become a widespread 'weed' of disturbed ground, such as pavements and roadsides and gardens. It has feathery leaves and yellow flower heads.

The bright green, feathery leaves and yellow flower heads of pineappleweed can be seen on bare, disturbed ground, such as paths and pavements, roadsides and tracks. Introduced into the UK during the late 19th century, its rapid spread has been attributed to the growth of motor transport - the seeds being picked up on tyre treads, along with the mud of the then untarmacked roads, and being deposited miles away as rain washed them off.

Pineappleweed lives up to its name - its crushed leaves have a distinctive pineapple smell. Its leaves are finely divided and feathery, and its yellow, conical flower heads which look remarkably like tiny pineapples appear from May to November. Like the other members of the daisy family, it is a composite flower, so has a flower head made up of lots of individual blooms, but it has no 'ray florets', so appears to have no 'petals'.

Pineappleweed is native to north-east Asia and is thought to have spread to the UK via North America. 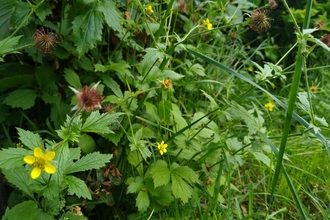 Look for wood avens along hedgerows and in woodlands. Its yellow flowers appear in spring and provide nectar for insects; later, they… 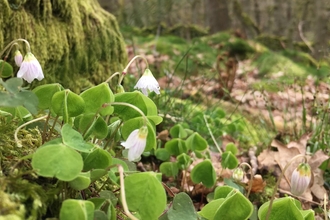 A delicate, small plant of woodlands and hedgerows, wood-sorrel has distinctive, trefoil leaves and white flowers with purple veins;… 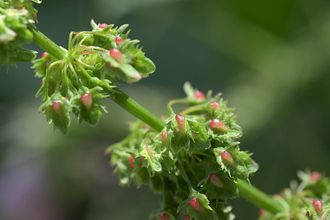 Broad-leaved dock is well-known to most of us as the remedy for Stinging nettle irritations. Often considered a 'weed', it can…