Scientific name: Geranium pratense
Meadow crane's-bill has striking violet flowers that pepper hay meadows, verges and grasslands with colour in summer. It is also a popular choice for gardeners and attracts a wide variety of bees.

The striking bluish-violet flowers of Meadow crane's-bill can be seen in lowland hay meadows, roadside verges and grasslands, particularly ones on chalky soils. It flowers between June and August, colouring the roadsides of areas like the Cotswolds. It is also a popular garden plant that will grow well in sunny spots.

The large, purple flowers of Meadow crane's-bill turn into pointed, bill-like seed pods that give the plant its common name. This clump-forming perennial has lobed leaves that are deeply divided.

Found throughout the UK, but rarer in South West England and East Anglia.

The nectar-rich flowers of Meadow crane's-bill are a favourite of many species of bee, including Buff-tailed and Red-tailed Bumblebees, and Honeybees. 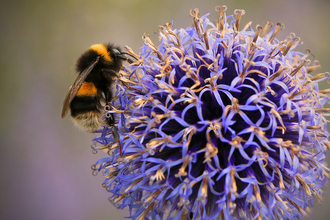 Spot these giants of the bumblebee world during springtime. They can be seen buzzing from flower to flower getting their pollen fix.