Scientific name: Heracleum mantegazzianum
As its name suggests, giant hogweed it a large umbellifer with distinctively ridged, hollow stems. An introduced species, it is an invasive weed of riverbanks, where it prevents native species from growing.

Giant hogweed was introduced into the UK by the Victorians as an ornamental plant for lakesides and gardens. It escaped into the wider countryside and gained notoriety in the 1970s as an alien species that favours damp spots like riverbanks. At this time, many children started to display blisters as a result of touching the plant's sap while using the stems to make pea-shooters or telescopes: sunlight makes the skin sensitive to the irritants in the plant, causing the skin to redden. Today, it is widely acknowledged that neither gardeners nor conservationists should attempt to cut the plant down (exposing its sap) as its toxins can cause serious, recurring skin damage.

Giant hogweed is an immensely tall umbellifer (member of the carrot family) that displays large, white, umbrella-like clusters of flowers. Its hollow stem is ridged and purple-spotted, and its leaves are large and divided.

Scattered distribution throughout the UK.

Its favoured position by the banks of rivers allows giant hogweed the perfect opportunity to expand as it sends its seeds into the water to be dispersed by its flow. Each plant can produce 30-50,000 seeds each year and colonies can quickly overtake a habitat, crowding out native plants.

The Wildlife Trusts work with pest controllers and organisations dealing with alien species to find the most wildlife-friendly solutions to some of our everyday problems. 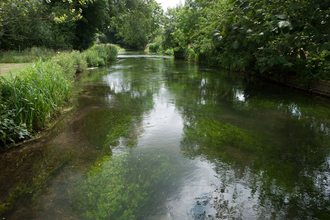 As the Environment Agency release figures today that reveal just 17% of England’s rivers are in good health, the Blueprint for Water…