Scientific name: Butomus umbellatus
Flowering rush is a pretty rush-like plant of shallow wetland habitats, such as ponds, canals and ditches. Its cup-shaped, pink flowers appear in summer, brightening up the water's edge.

Flowering rush is an attractive and striking perennial plant of shallow water and wetland margins. Its upright, green stems display clusters of bright pink flowers from July to August, and its leaves are long and grass-like. It spreads with creeping rhizomes (underground stems).

Flowering rush is a tall, rush-like plant that displays a clustered flower head with cup-shaped flowers; the flowers have three pale pink petals, interspersed with three dark pink sepals. It has long, narrow, green leaves and can form large stands.

Flowering rush is actually not a member of the rush family, but has a family all to itself! It was accidentally introduced into North America, where it has become an aggressively invasive species. 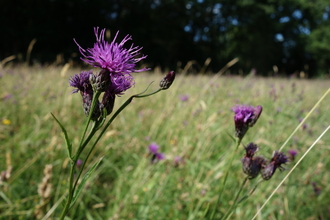 Saw-wort gets its common name from the serrated, saw-like edges to its leaves. It is a plant of unimproved hay meadows and woodland… 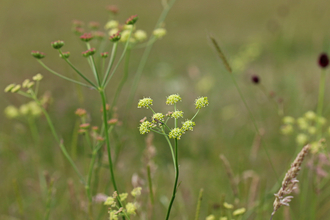