Scientific name: Polygala amarella
Dwarf milkwort is a rare plant of chalk and limestone grasslands with short turf; it can mainly be found in Kent, Yorkshire and Cumbria. It has bluish, sometimes pink, flowers atop its short stems.

Dwarf milkwort is a small, short-lived perennial that can be found on chalk and limestone grasslands, particularly with short turf. It is rare and mainly found in small populations in Kent (hence its other name of 'Kentish milkwort') and the north of England, including Yorkshire and Cumbria. Look for small clusters of tiny bluish or pinky flowers from May to July.

Dwarf milkwort is a low-growing plant that has tiny, blue or pink flowers that sit in small clusters atop the stems. Its leaves are elliptical, stalkless and alternate up the stem.

Dwarf milkwort is a member of the family of plants that Medieval herbalists prescribed to nursing mothers in the belief that it made 'milk more abundant'. This idea came from its Greek name of 'much milk', which probably actually referred to the milk they got from the cattle that grazed where it grew.

The petals of the rare Lizard orchid's flowers form the head, legs and long tail of a lizard. They are greenish, with light pink… 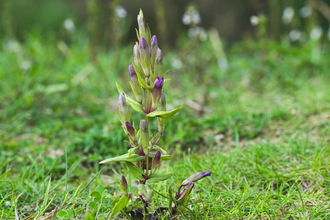 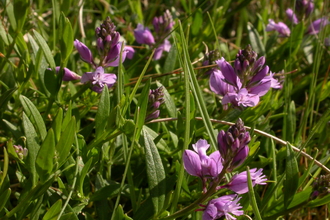 The dark-blue flowers of Common milkwort pepper our grasslands from May to September. It can also appear in pink and white forms.