Scientific name: Pinus sylvestris
The Scots pine is the native pine of Scotland and once stood in huge forests. It suffered large declines, however, as it was felled for timber and fuel. Today, it is making a comeback - good news for the wildlife that depends on it.

The Scots pine is the native pine tree in Scotland and has been widely planted elsewhere in the UK, too. During the medieval ages, a great pine forest stretched across most of the Highlands, but by the 17th century, it was disappearing as timber was used for ship-building and charcoal. Although the late 20th century saw just a fraction of the original forest left standing, regeneration has now started to occur, especially in areas fenced off from browsing deer.
This is good news for wildlife as Scots pine forests provide shelter for all kinds of species, and food for threatened Red Squirrels and endemic Scottish Crossbills.

The Scots pine is a tall, straight pine tree with distinctive orange-brown, scaly bark. Its blue-green needles appear in pairs and can be up to 7cm long. Male cones are yellow and female cones are green, maturing to grey-brown; pine cones range from 3-7.5cm long.

Grows wild in the Highlands of Scotland, but widely planted elsewhere.

The Scots pine plays host to a whole range of species, from Stump lichens and Scottish wood ants that live on and under the bark, to majestic Ospreys and Golden eagles that nest in its level branches.

The Wildlife Trusts manage many woodland nature reserves sympathetically for the benefit of all kinds of wildlife. A mix of coppicing, scrub-cutting, ride maintenance and non-intervention all help woodland wildlife to thrive. You can help too: volunteer for your local Wildlife Trust and you could be involved in everything from traditional forest crafts to surveying for woodland plants. 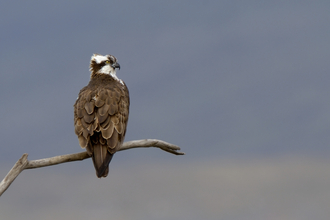 Once just a single pair of ospreys survived in Scotland: now they are back. Find out where to see ospreys around the UK, or catch some…