Scientific name: Hediste diversicolor
The ragworm is highly common on our shores, though rarely seen except by the fishermen that dig them up for bait.

The ragworm is highly common around the UK. It lives in a burrow in muddy seabeds and looks a lot like an underwater millipede. They are the opposite of picky eaters and will feed on just about anything. They spin a mucus net at the entrance to their burrow in which they catch plankton and other small particles. If it's slim pickings, they leave the burrow in search of bigger food - scavenging on whatever is available or hunting out small invertebrates. Ragworms are a favourite food of flatfish and wading birds, including curlew and bar-tailed godwits.

Most often hidden in its burrow, though sometimes caught out hunting or hiding under rocks near to its burrow. They are highly segmented and look like a millipede. They are normally pale brown but males are a bright green during the breeding season.

Found around all UK coasts, particularly common in estuaries.

Ragworms were given their scientific name "diversicolor" as the males change colour during the breeding season, going from a dull brown to bright green.

With their beautiful striped tentacles, it's easy to see where dahlia anemones got their floral name from. Look out for them next… 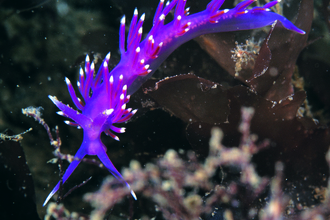 Despite its dazzling colouration, this fabulous nudibranch can be easily missed, due to its small size! 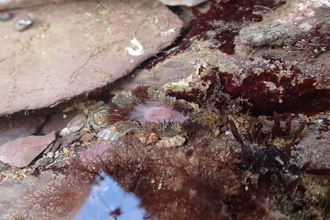 It is easy to be confused by these flower-like animals with flowery names! The ‘daisy’ anemone is one of the larger UK anemone species…