Scientific name: Nucella lapillus
This sea snail is abundant on rocky shores around the UK. It is an active predator, feasting on mussels and barnacles before retreating to crevices to rest.

With a pointed snail-like shell, dog whelks are found on the lower shore wherever there are barnacles or mussels - their favourite food.
Once fed, dog whelks will rest in a crevice for a number of days before feeding again. Dog whelks avoid dense mussel beds as the mussels can trap the whelk using their sticky byssus threads. Nearly 30% of dog whelks trapped in this way die from slow starvation. Dog whelks lay their eggs in small yellowish capsules which can be spotted under rocky overhangs on the lower shore. Each capsule contains up to a thousand eggs - though most of these will become food for the few that hatch and develop.

Dog whelks have a conical shell with a pointed spire. They predominantly have white shells in the UK, but may be brown or yellow. The dog whelk is smaller than the common whelk, smoother than the netted whelk and more rounded than the oyster drill. The animal itself is white or cream coloured but rarely seen.

Found all around our coasts.

The dog whelk feeds on mussels and barnacles by boring through their shells. It then injects enzymes to digest the prey within its shell, sucking the resulting 'liquid soup' out through its proboscis. It can take days to eat its prey this way. 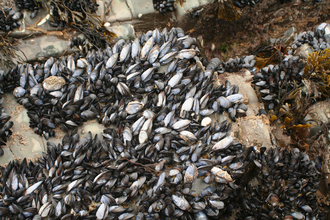 The Common mussel is a familiar sight on shores all around the UK and is a favourite food of people, seabirds and starfish alike. 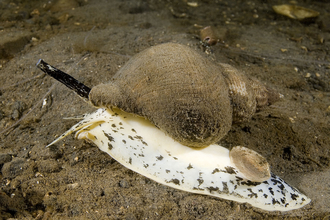 The common whelk is the largest sea snail found in UK seas, though you're more likely to find the dry balls of empty whelk egg… 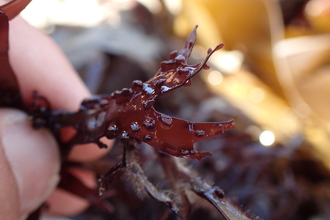