Scientific name: Orcinus orca
These highly intelligent predators roam huge distances in search of prey in tight family groups that share a specific dialect. Their black and white markings are unmistakable and spotting them is truly one of the UK's greatest wildlife experiences.

Protected in the UK under the Wildlife and Countryside Act, 1981, listed under CITES Appendix II and classified as a Priority Species under the UK Post-2010 Biodiversity Framework. Also protected under the Conservation (Natural Habitats, etc.) Regulations (Northern Ireland) 1998

Orcas are top predators, found throughout the world's oceans with different populations specialising in different prey types. There is a resident group in UK seas, known as the 'west coast community', that feed mainly on marine mammals. Migrant fish-eating Orcas arrive in Northern Scotland in early summer to feast on Herring and Mackerel (though they've also been known to eat seals too!). Orcas are highly social and are most often spotted in family groups. The UK's resident orca community consists of just 8 individuals, 4 males and 4 females, and unfortunately no calf has been born in over 20 years.

The black and white pattern and enormous dorsal fin make the Orca unmistakable. Males are larger than females and have much taller dorsal fins, sometimes up to 1.8 metres tall. A female's fin is around half this height and curves backwards.

A resident group ranges widely around the west coast of the UK and Ireland. A separate population are seasonal visitors to Northern Scotland, particularly the Shetland and Orkney Islands.

Orcas, or Killer Whales, are actually dolphins! They are the largest member of the dolphin family and their name originated as "whale killer" as they are known to work together to kill whales much larger than themselves.

Report your Orca sightings to your local Wildlife Trust. If you meet Orcas whilst at sea, maintain a distance of at least 100m. If the orcas approach you, maintain a constant speed and allow them to interact on their own terms and leave at will. If you find a stranded Orca (dead or alive), please report it to the relevant authority (see www.wildlifetrusts.org/living-seas/marine-protected-areas/sightings). The Wildlife Trusts are working with Government to elimate marine pollution and to encourage more sustainable fisheries. You can support our work by joining your local Wildlife Trust, joining a beach clean and choosing sustainable seafood. 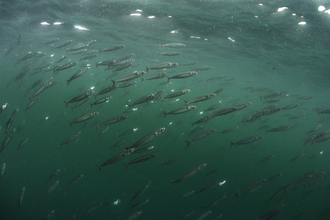 Mackerel are a sign of summer's arrival, when they appear inshore in huge numbers all around the UK. As well as being a sustainable…