Scientific name: Phoca vitulina
The smaller of our two UK seal species, common seals are also known as harbour seals. Despite being called "Common", they are actually less common than grey seals!

Protected in Britain under the Conservation of Seals Act, 1970, and classified as a Priority Species under the UK Post-2010 Biodiversity Framework. Also protected under the Wildlife (Northern Ireland) Order, 1985.

When not at sea, common seals are found around sheltered shores and estuaries, where they haul out on sandbanks and beaches. When out of the water, they sometimes hold their body in a curved banana position, with their head and tail both in the air at the same time. Like grey seals, they feed on fish, but also eat squid, whelks, crabs and mussels. Common seal pups are born during the summer and can swim when they are only a few hours old!

The common seal can be distinguished from the grey seal by its smaller size and shorter head with a more concave forehead. Common seals have V-shaped nostrils. They are very variable in colour, from blonde to black, but generally grey with dark spots.

Found around the coasts of Scotland, Northern Ireland and Teesmouth and eastern England.

Common seals have been known to swim up rivers in search of their next meal and have even been spotted over a hundred miles upstream!

Seals regularly 'haul out' to digest their food or rest, so if you meet one on a beach, give it plenty of space and keep dogs away. This is especially true for mothers and pups. Seals are also easily spooked from their resting spots, so if in a boat or kayak, maintain a distance of at least 100m where possible. If you suspect a pup has been abandoned or a seal is injured and in need of attention, keep your distance and call for help. Entanglement in marine litter and ghost fishing gear is a big threat to seals, so why not participate in a beach clean or simply pick up and safely dispose of any rope, strapping or net next time you're at the beach. To help seals and other marine wildlife, The Wildlife Trusts are working with researchers, politicians and local people towards a vision of 'Living Seas', where marine wildlife thrives. Do your bit for our Living Seas by supporting your local Wildlife Trust. 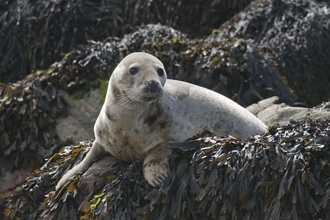 Have you ever seen the curious face of a grey seal bobbing in the waves when visiting the beach? Grey seals can be seen lying on beaches… 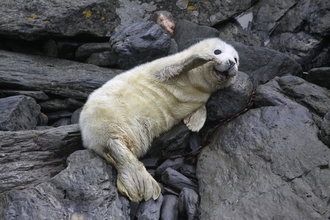 Searching for an original gift for a nature lover? Sponsor a seal with the Wildlife Trusts to help fund conservation efforts. Perfect…

Where to see seals