Scientific name: Palinurus elephas
Spiny lobster, crawfish, crayfish, rock lobsters - many names, one animal! This pretty lobster was made extinct in many areas through overfishing, but is now making a slow comeback.

Classified as a Priority Species under the UK Post-2010 Biodiversity Framework. It is also a Feature of Conservation Importance for which Marine Conservation Zones can be designated in English and non-devolved offshore waters. Classified as Vulnerable on the IUCN Red List.

The Spiny lobster is a crustacean, related to crabs and even barnacles. They lack the typical large pincers of Common lobsters and instead have 2 small hook-like claws. They live in crevices and caves amongst the rocks in shallow waters down to around 70m.

They get their name from the spines than cover their shell (carapace), though they are also known as crawfish, crayfish and rock lobster - depending where you are in the UK! They stay in their hidey-holes during the daytime and come out to feed at night. They are scavengers and will feast on whatever they can find, including crabs, worms, starfish and any dead animals.

A large lobster, covered in spines but without the big claws of the common lobster. Orangey brown in colour with long antennae.

Found around the South West of England and Wales and along the West Coast of Scotland.

Spiny lobsters get pretty noisy during the breeding season, making a sort of "creak" noise by rubbing their antennae together to attract a mate!

Research has shown that spiny lobster populations benefit from the designation of Marine Protected Areas. A number of Marine Conservation Zones have been designated in the South West of England to protect and recover spiny Lobster populations. We know that many lobsters will spillover into the surrounding non-protected area in search of new territories and food; giving a wider benefit and potentially supporting a small fishery if sustainably managed. 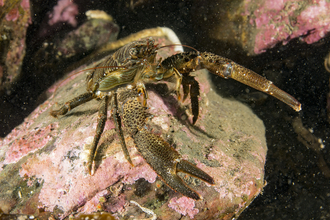 These feisty crustaceans are the ‘Houdinis’ of the rocky shore, evading capture as soon as disturbed! 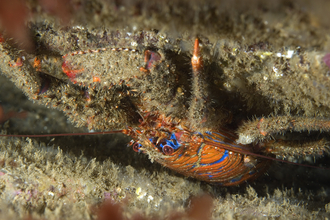 A bizarre half lobster/half crab, this squat lobster is one of the true stunners of the rocky shore! 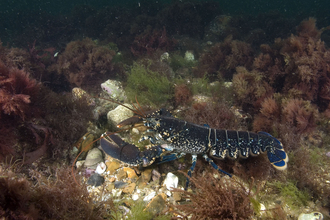 A well known inhabitant of UK seas, common lobsters can reach up to 60cm in length.