Scientific name: Mustela erminea
The stoat is a small Mustelid, so is related to the weasel and otter. It has an orange body, black-tipped tail and distinctive bounding gait. Spot it on grassland, heaths and in woodlands across the UK.

The stoat is a small predator, with a long, low-slung body that makes it particularly well suited to hunting small rodents and rabbits. It can easily kill an adult rabbit, which is much larger than itself, with a bite to the base of the skull. Stoats are active by day and night, and are easiest to spot in open habitats, such as sand dunes, grassland and heathland. They mate in summer, but delay implantation of the fertilised egg until the spring of the following year. They have one litter of six to twelve kits a year.

The stoat has an orangey-brown back, a creamy white throat and belly, and a black-tipped tail. It is larger than the similar weasel, has a longer tail and has a distinctive bounding gait, arching its back as it moves; Weasels do not bound, but run close to the ground.

Widespread, found throughout the country, although absent from some Scottish islands, the Isles of Scilly and most of the Channel Islands.

In the winter, stoats living in colder climes may turn almost completely white, with just a black tip to the tail. This is known as 'Ermine' and is extremely valuable in the fashion world as the white fur is unusually dense. Stoats in warmer parts of the UK may not change colour at all, or may take on a 'patchy' appearance.

How can you help 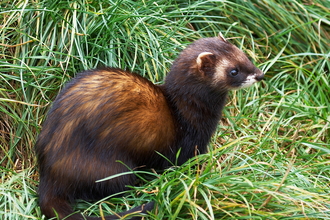 Known for its bandit-like appearance, the polecat was once so persecuted it was on brink of extinction in the UK. Thankfully, numbers… 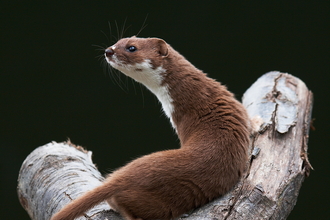 Weasels may look adorable, but they make light work of eating voles, mice and birds! They are related to otters and stoats, which is… 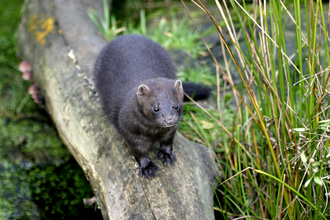 Escaped or intentionally freed from fur farms in the 1960s, the American mink is now well established in the UK. Its carnivorous nature…