Scientific name: Martes martes
Largely confined to the north of the UK, the rare pine marten is nocturnal and very hard to spot. However, it can be enticed to visit a peanut-laden birdtable.

An elusive mustelid, the pine marten is mostly found in the north of the UK, particularly Scotland. It prefers woodland habitats, climbing very well and living in tree holes, old squirrel dreys or even old bird nests. It feeds on small rodents, birds, eggs, insects and fruit, and can even be encouraged to visit birdtables laden with peanuts and raisins. During the summer mating season, they make shrill, cat-like calls. The following spring, the female will have a litter of between one to five kits, which are independent by autumn.

Mainly found in Scotland, particularly in the Highlands, and Ireland. Populations in northern England and North Wales are fragmented and small.

Bilberries, rowan berries and blackberries make up much of a pine marten's summer diet, often resulting in its 'scats' (droppings) turning blue or red in colour. Pine martens regularly leave their scats on forest trails or in prominent places like boulders to mark their territories. When they are fresh, scats may have a slimy appearance due to mucous binding them together. They may contain fur, feathers, bones or seeds. 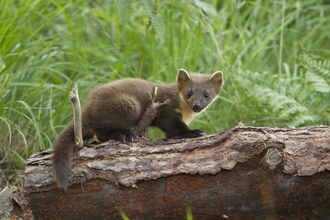 Searching for an original gift for a nature lover? Adopt a pine marten with the Wildlife Trusts to help fund conservation efforts.… 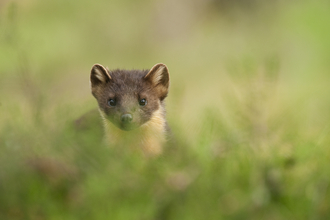 Pine martens have been reintroduced to England for the first time following near extinction. Gloucestershire Wildlife Trust has led this… 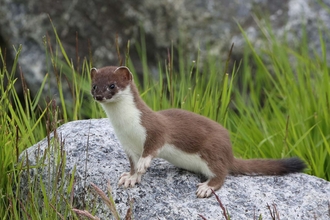