Scientific name: Erinaceus europaeus
Considered a gardener’s best friend, hedgehogs will happily hoover up insects roaming in vegetable beds. Famously covered in spines, hedgehogs like to eat all sorts of bugs and crunchy beetles. They are most active at night and hibernate through winter.

Protected in the UK under the Wildlife and Countryside Act, 1981. Priority Species under the UK Post-2010 Biodiversity Framework.
IUCN Red List for British Mammals - vulnerable to extinction.

Round, brown and famously covered in spines, the hedgehog is the UK’s most familiar wild animal. They can be spotted in parks and gardens where bushes provide the perfect daytime getaway! They love long grass full of insects to feast on once the sun has set.

Hedgehogs eat all kinds of invertebrates, as well as amphibians, birds' eggs and anything else they can catch; they particularly like big, crunchy beetles and earthworms, making them a gardener's best friend. Hedgehogs hibernate over winter, from about November to April, in a nest of leaves or logs called a 'hibernaculum'.

A unique and unmistakeable animal, the hedgehog is small, brown and round, with yellow-tipped spines over its back, and a fur-covered face. Mostly nocturnal, you may see or hear one snuffling around the garden. Or look out for the signs of hedgehogs, such as medium-sized, black droppings full of insect bits on the lawn.

Widespread, found throughout the country in a variety of habitats, though absent from some Scottish Islands. A large proportion of the hedgehogs on Alderney are blonde!

Hedgehogs are known for their ability to roll themselves into a ball of spines when threatened. These spines are actually modified hairs and the average hedgehog has about 7000 of them, which can be raised using powerful muscles along their back. 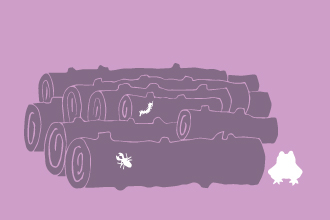 Log piles are perfect hiding places for insects, providing a convenient buffet for frog, birds, and hedgehogs too! 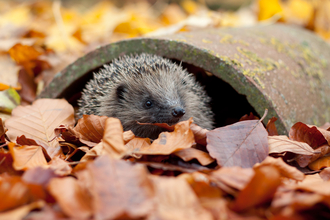 Hedgehogs hibernate during the winter, and while you may see one wandering around during this time in search of a new nest site, a… 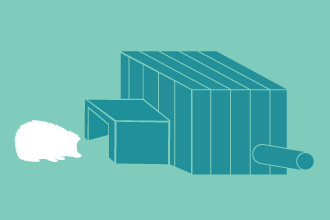 How to build a hedgehog home

By providing safe places for hedgehogs to live, you’re much more likely to see these prickly creatures in your garden.