Scientific name: Dolomedes fimbriatus
The chocolate-brown Raft spider inhabits bogs and ponds. It can be spotted sitting near the water, its legs touching the surface. When it feels the vibrations of potential prey, it rushes out to catch it, floating like a raft.

The Raft spider is a large, chunky spider that lives around the edge of ponds and ditches, and on wet heaths and bogs. Adults sit at the edge of the water, or on floating vegetation, with their front legs resting on the water's surface in order to feel for the vibrations of potential prey. Using the surface tension of the water, they chase out on to the water to catch their prey, which will even include tadpoles or small fish. Raft Spiders will also swim underwater, often diving beneath the surface when threatened.

The Raft spider is a large, chocolate-brown spider, with a pale yellow stripe running down each side of its body.

The much rarer Fen Raft spider is similar to the Raft Spider, but is only found in two places in the UK, one of which is a Suffolk Wildlife Trust nature reserve. The Fen Raft Spider is a Priority Species under the UK Post-2010 Biodiversity Framework.

The Wildlife Trusts manage many wetland and heathland nature reserves for the benefit of the wildlife they support. You can help by supporting your local Trust and becoming a member; you'll find out about exciting wildlife news, events on your doorstep and volunteering opportunities, and will be helping local wildlife along the way. 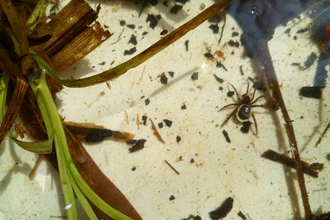 There are several species of spider that live in our wetlands, but the Water Spider is the only one that spends its life under the water…