Scientific name: Lasiommata megera
The wall brown or 'wall' gets its name from the fact it rests on any bare surface or wall! It can be found in open, sunny places like sand dunes, old quarries, grasslands and railway cuttings.

The wall brown is a medium-sized butterfly which is on the wing in two or three broods, between the middle of April and the end of October. It is a widespread, but declining, butterfly of hot, sunny places such as open grassland, sand dunes and rocky foreshores, disused quarries and railway cuttings, and even gardens. Caterpillars feed on a variety of grasses including false broom and tor-grass.

The wall brown is mainly pale orange with greyish-brown markings and black eyespots. The best way to identify the 'brown' butterflies is by looking at the eyespots on their wings. The combination of orange and brown markings, together with one large eyespot on the forewing and four smaller eyespots on the hindwing, is unique to the Wall Brown.

A scarce butterfly found in England, Wales, Northern Ireland and southern Scotland, particularly around the coast.

Living up to its name, the wall brown has a habit of basking on bare patches of rock, earth and stone, such as walls and paths. This allows it to raise its temperature both directly from the sun and indirectly from the reflected heat of the surface it is on, allowing it to fly. 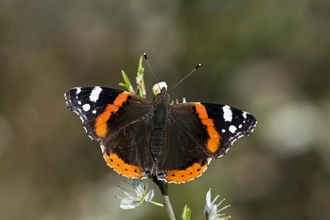 The red admiral is an unmistakable garden visitor. This black-and-red beauty may be seen feeding on flowers on warm days all year-round… 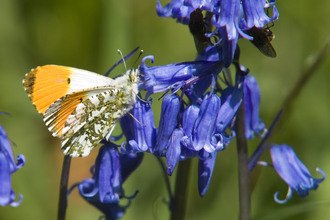 It’s easy to see where these butterflies get their name – the males have bright orange tips on their wings! See them from early spring… 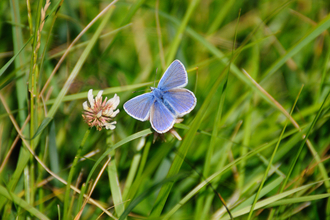