Scientific name: Cupido minimus
The small blue's name is a little misleading: it is our smallest butterfly, but only shows a dusting of blue on brown wings. It is scarce, occurring on chalk grassland, mostly in southern England.

The small blue is the smallest of all the UK's butterflies. Adults are on the wing from May to August and can be seen feeding on common bird's-foot-trefoil or horseshoe vetch on chalk grassland, but only where kidney vetch also grows - the sole foodplant of the caterpillars. Males set up territories in sheltered places and the females lay their eggs on the kidney vetch; the emerging caterpillars feed on the flowerheads.

Despite its name, the male small blue only has a small dusting of blue near to its body, otherwise it is a brown butterfly with pale, silver-grey underwings. The female is similar, but without the blue markings on the upperwings.

Mostly found in southern England, but also in parts of Scotland and Wales.

The small blue tends to live in small colonies of up to 30 individuals. Both sexes can be found in communal roosts, facing head down in the grass. 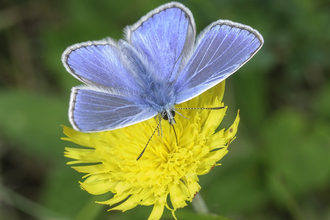 See blue butterflies around the UK this summer! Marvel at the once extinct, still rare large blue at a handful of locations, or the more… 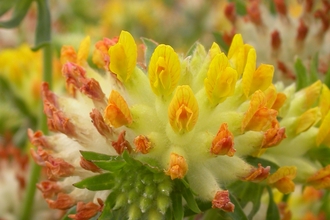 The small, yellow flowers and woolly appearance of Kidney vetch make this plant easy to spot. Look for it growing low to the ground on… 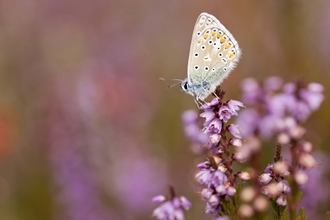 The common blue butterfly lives up to its name - it's bright blue and found in all kinds of sunny, grassy habitats throughout the…