Scientific name: Cassida viridis
When threatened, the Green tortoise beetle acts just like a tortoise, pulling its feet and antennae in and hunkering down, gripping the leaf it is on as tightly as possible. Look for it on White Dead-nettle in gardens and hedgerows.

The Green tortoise beetle is one of a group of several closely related beetles. It feeds on White dead-nettle, Hedge Woundwort and Water Mint, and is often found in gardens. When disturbed, the adults behave just like tortoises, retracting their antennae and feet, and pulling their 'shell' tight down around them as they grip tightly on to the leaf they are on.

Widespread in England and Wales, rarer in Scotland.

The spiny larvae of the Green tortoise beetle hold a 'coat' of cast skins and droppings on their backs to camouflage themselves and deter predators. 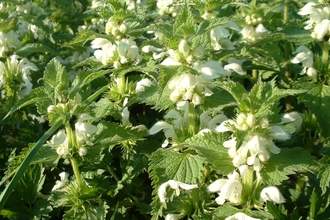 White dead-nettle does not sting. It displays dense clusters of white flowers in whorls around its stem, and can be found on disturbed… 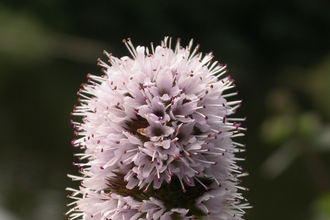 Water mint grows in damp places and has aromatic leaves that can be used to flavour food and drink. Gathering wild food can be fun, but…