Scientific name: Chrysis ignita agg.
If seen up close, the glittering Ruby-tailed wasp is, perhaps, one of the UK's most beautiful insects. A solitary wasp, it can be found in sandy and rocky habitats like quarries, outcrops and walls.

The glittering, metallic Ruby-tailed wasp is one of many species of solitary bee and wasp that can be spotted in a number of habitats from walls to sandy quarries, rocky outcrops to tree trunks. Solitary bees and wasps do not live in colonies like Honey Bees; instead, the female builds a nest by herself, stocks it with pollen, and lays an egg within each cell she has created. However, the adults of the Ruby-tailed wasp are a little lazier: the females actually lay their eggs in the nests of other solitary bees and wasps, especially Mason Bees. When the eggs hatch, they eat the larvae of the Mason Bees and develop - this gives the Ruby-tailed wasp its other name of 'Cuckoo Wasp'.

The head and thorax of the Ruby-tailed wasp is a shiny blue-green colour, and the abdomen is a deep ruby-red. However, Chrysis ignita is one of a number of very similar Ruby-tailed Wasp species which are extremely hard to tell apart.

Parasitising other bees' nests is a dangerous business, but the Ruby-tailed wasp has a number of defences: its abdomen is concave, allowing it to curl up into a ball; it has a hard body cuticle that protects it from the stings of the host species; and it does have a sting, although this is not venomous.

Solitary bees and wasps, along with many of our other, often-overlooked insects, are important pollinators for all kinds of plants, including those which we rely on like fruit trees. The Wildlife Trusts recognise the importance of healthy habitats to support all kinds of species throughout the food chain, so look after many nature reserves for the benefit of wildlife. You can help too: volunteer for your local Wildlife Trust and you could be involved in everything from coppicing to craft-making, stockwatching to surveying. 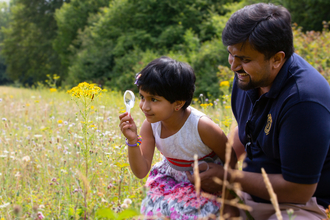 Family Wildlife Trust membership, great for ideas for things to do with the kids.