Scientific name: Coprinus comatus
As its name suggests, the shaggy inkcap, or 'lawyer's wig', has a woolly, scaly surface to its bell-shaped toadstools. It is very common and can be seen at the road side, in parklands and even popping up in lawns.

The shaggy inkcap is an unmistakable fungus - its tall, white, shaggy cap providing this name and also others, such as 'lawyer's wig' and 'shaggy mane'. It is widespread and common on roadside verges, parkland, grassland and gardens, growing in small groups. It is edible when young. Fungi belong to their own kingdom and get their nutrients and energy from organic matter, rather than photosynthesis like plants. It is often just the fruiting bodies, or 'mushrooms', that are visible to us, arising from an unseen network of tiny filaments called 'hyphae'. These fruiting bodies produce spores for reproduction, although fungi can also reproduce asexually by fragmentation.

The shaggy inkcap displays a tall, narrow, cylindrical cap that is white and very 'shaggy' with 'scales' over its surface. The cap gradually opens out to a bell shape. The gills are very crowded; they are white at first, then turn pink and eventually black, dissolving from the margin of the cap until it is almost entirely gone. The shaggy inkcap has a tall, smooth, white stem with a moveable ring.

Similar to the shaggy inkcap, the snowy inkcap (Coprinus niveus) is much smaller and can be found growing in pastures on horse or cow dung. 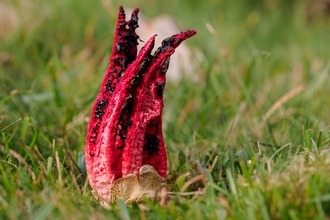 This smelly, strange looking fungus is also referred to as octopus stinkhorn or octopus fungus. Its eye-catching red tentacles splay out… 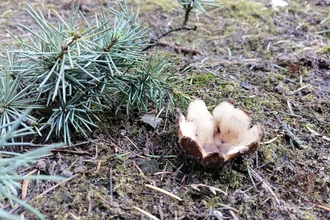 This fascinating cup fungus is a lovely thing to stumble upon -should you be lucky enough!