Scientific name: Sarcoscypha austriaca
As its name suggests, the scarlet elfcup is a bright red, cup-shaped fungus. It is widespread, but scarce, and can be found on fallen twigs and branches, in shady, damp places.

The scarlet elfcup displays bright red cups with short stems. It can be seen in late winter and early spring on fallen twigs and branches (often Hazel, Elm and Willow), usually buried under moss. It is reasonably widespread, but not very common. It is mostly found in damp, shady areas. Fungi belong to their own kingdom and get their nutrients and energy from organic matter, rather than photosynthesis like plants. It is often just the fruiting bodies, or 'mushrooms', that are visible to us, arising from an unseen network of tiny filaments called 'hyphae'. These fruiting bodies produce spores for reproduction, although fungi can also reproduce asexually by fragmentation.

The scarlet elfcup has rounded, regular-shaped fruiting bodies that look like cups; they have a bright scarlet and smooth inner surface. The outer surface is pale pink and covered in tiny hairs. The cup has a very short stem.

The ruby elfcup is very similar in appearance to the scarlet elfcup (Sarcoscypha austriaca). There's no physical difference. You can only tell them apart by microscopy (tiny fine hairs are the difference).

Fungi play an important role within our ecosystems, helping to recycle nutrients from dead or decaying organic matter, and providing food and shelter for different animals. Our gardens are also a vital resource for wildlife, providing corridors of green space between open countryside. Try leaving log piles and dead wood to help fungi and the wildlife that depends on it. 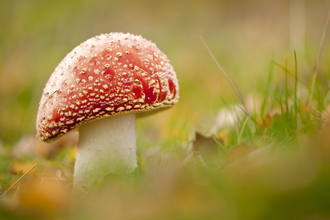 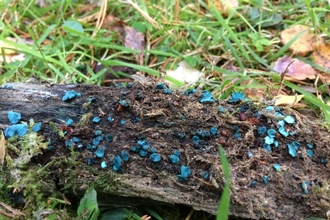 A beautiful, tiny fungus, green elf cup can be commonly found on the decomposing wood of deciduous trees in woods, parks and gardens.… 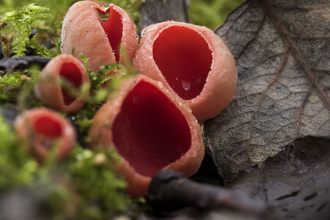 As its name suggests, the ruby elfcup is a bright red, cup-shaped fungus. It is widespread, but scarce, and can be found on fallen twigs…