Scientific name: Aix galericulata
A pretty and distinctive little waterbird, the mandarin duck was introduced from the Far East as its name suggests. Oddly for a duck, it nests in trees, sometimes high above the water.

The beautiful mandarin duck was introduced from the Far East, where it can still be found in China, Japan, Korea and parts of Russia. It escaped, or was deliberately released, from captivity in the UK. Mandarin ducks are actually quite shy birds, often hiding beneath overhanging willows and usually only forming small flocks.

A beautiful, unmistakable duck: male mandarins have elaborate plumage with orange plumes on their cheeks, orange 'sails' on their back, and pale orange sides; females are dull in comparison, with grey heads, brown backs and white eyestripe.

Introduced from China and now found on park lakes and other wetlands with overhanging trees, mainly in South East England, but also in North England, Wales and Scotland.

The mandarin duck nests in holes in trees, sometimes high up and a long way from the water. Shortly after the ducklings hatch, the female flies down and tries to coax the young to jump from the nest. Once they have left the tree and made their way back to water, the father will return to the family and help to protect the ducklings.

The Wildlife Trusts record and monitor our local wildlife to understand the effects of various factors on their populations, such as the introduction of new species. You can help with this vital monitoring work by becoming a volunteer - you'll not only help local wildlife but learn new skills and make new friends along the way. 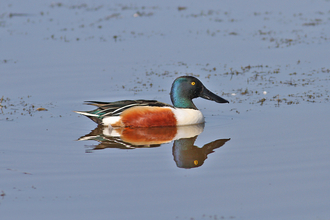 Living up to its name, the shoveler has a large and distinctive shovel-like bill which it uses to feed at the surface of the water. It… 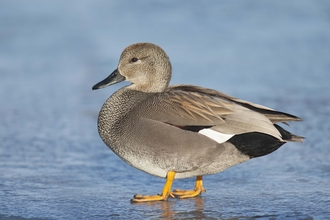 How to identify dabbling ducks

A guide to identifying our most common dabbling ducks: mallard, wigeon, teal, pintail, gadwall and shoveler. 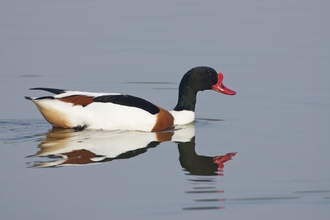 One of our largest ducks, the shelduck is a handsome creature with a dark green head, red bill and chestnut-brown band across its white…