Scientific name: Anas querquedula
This scarce breeding duck is a summer visitor, spending the winter in Africa. Although large flocks can be found in their wintering grounds, they are usually only seen in pairs or small groups in the UK.

The garganey is a small dabbling duck, slightly larger than a Teal. They spend the winter in central Africa, with small numbers appearing in the UK between March and October. Breeding pairs favour shallow wetlands, mostly in south and central England. They can be very secretive, preferring areas with lots of cover from aquatic plants. Unlike teal, garganey rarely upend completely when feeding, preferring just to dip their head or skim the surface with their bill.

A small dabbling duck, only slightly larger than a teal. Males are unmistakeable in their breeding plumage, with a brown head and breast, grey flanks and a broad white crescent above the eye. Females are mostly brown, resembling a female teal, but with a longer, all-grey bill and bolder facial markings.

Around 100 pairs of garganey breed in the UK, mostly in central, southern and eastern England. During migration they can turn up almost anywhere. Occasional birds winter in the UK.

The breeding call of a male garganey is a strange, croaking rattle - it sounds a little like running a fingernail across the teeth of a comb! 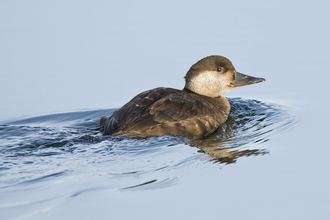 The common scoter has suffered large declines in the UK, threatening its survival here. Look out for this duck feeding at sea in winter… 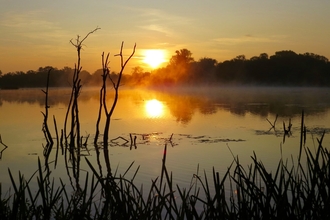 Healthy wetlands store carbon and slow the flow of water, cleaning it naturally and reducing flood risk downstream. They support an…

When spotting the pintail in winter, look out for the fabulous, long tail feathers that characterise it. This dabbling duck feeds at the…