Scientific name: Branta canadensis
The Canada goose is our most familiar goose, although it is not actually native to the UK. A common and bold bird, it can be found around most parks, lakes, reservoirs and gravel pits.

Introduced, non-native species. Common. Protected in the UK under the Wildlife and Countryside Act, 1981.

The Canada goose is our largest goose and maybe our most familiar. They are a common bird across most of the country, nesting on park lakes, flooded gravel pits and reservoirs. Canada geese are not native to this country, having been introduced from North America about 300 years ago. After the Second World War, they spread across the UK, becoming pests in some areas because they congregate in large numbers and can cause damage.

The Canada goose is a large goose, with a black neck and head, grey-brown back and white cheek patches.

Found almost throughout the country, except in the north of Scotland.

Canada geese were first introduced to the UK in St. James's Park, London, in the 17th century. Today, the population numbers 62,000 breeding pairs. 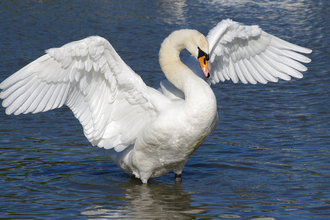 One of our most iconic waterbirds, the mute swan is famed for its grace and beauty. It is also considered to be a romantic of the bird… 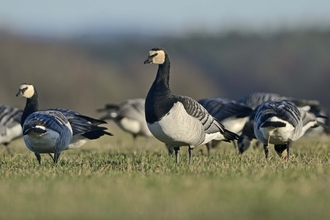 The black-and-white barnacle goose flies here for the 'warmer' winter from Greenland and Svalbard. This epic journey was once…