Scientific name: Calidris alpina
Found along the coast all year-round, the Dunlin is a small sandpiper that breeds and winters in the UK. It can be seen in its upland breeding grounds in summer, when it turns brick-red above and sports a black patch on its belly.

The Dunlin is a small sandpiper, which can be found at the coast all year round, preferring estuaries, where it seeks out insects, worms and molluscs to eat. In winter, it feeds in large flocks and roosts in nearby fields and saltmarshes. In summer, it breeds in the uplands of the UK, with large numbers in the Western and Northern Isles of Scotland, and the Pennines in England.

Sandpipers can be a difficult group of birds to get to grips with. The Dunlin is unmistakeable in its summer plumage: adults are brick-red above, with a black belly patch. In its winter plumage, the Dunlin is grey above and white underneath, looking very much like the Sanderling. It is a little smaller, however, and has a longer, down-curved bill.

A common winter visitor to our coasts. Nests on upland moors and bogs in England, Scotland and Wales, and on coastal grasslands around the west coast of Scotland.

The common name, Dunlin, comes from this birds' habit of nesting in upland moors and bogs: 'dun' is an old Gaelic word for hill and 'linne' means pool or pond. 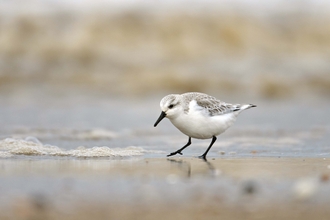 The Sanderling scampers about the waves looking for marine crustaceans, fish and even jellyfish to eat. It visits the UK in winter from… 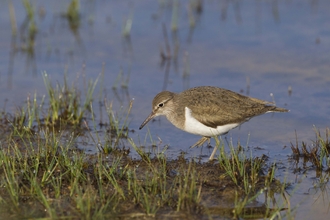 The Common sandpiper breeds along rivers, and by lakes, reservoirs and lochs in upland Scotland, Northern England and Wales. It can be… 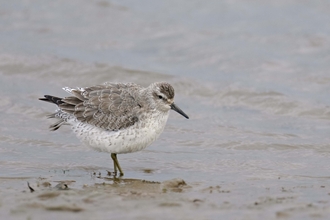 A stocky, little sandpiper, the knot can be spotted in estuaries from August onwards, migrating here from the Arctic where it breeds.…