Scientific name: Fratercula arctica
A funny little fellow in his glossy black dinner jacket and crisp white bib, the puffin is instantly recognisable from its brightly coloured parrot-like bill. Puffins use their colourful bill to attract a mate, the male with the brightest bill is considered the most handsome!

Classified in the UK as Red under the Birds of Conservation Concern 4: the Red List for Birds (2015). Listed as Vulnerable on the global IUCN Red List of Threatened Species.

Sometimes referred to the ‘sea parrot’ the puffin is instantly recognisable from its brightly coloured parrot-like bill. Spending winter at sea, every year thousands of puffins return to the UK to nest in their little hobbit-like burrows in the ground. Puffins are loyal to one another, each year mating with the same bird and producing one chick. This one chick, known as a puffling, keeps its parents busy though fishing to keep it well-fed and satisfied. Their favourite meal is sand eel which they catch by diving and swimming using their wings.

The puffin is black above, with a white belly and cheeks, a large, multicoloured bill, and orange, webbed feet.

Nests on cliffs and islands at scattered locations around the coast of Scotland, northern England, South West England and Wales.

The puffin is also known as the 'Sea Parrot' due to its brightly coloured bill, which is part of its breeding plumage. The bill is serrated to hold fish in place; one puffin was recorded as having 83 small sandeels in its bill at once! 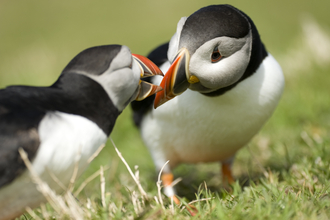 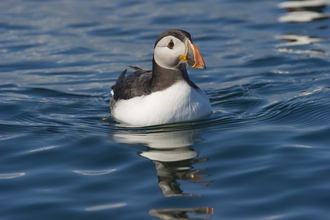 Searching for an original gift for a nature lover? Adopt a bird with the Wildlife Trusts to help fund conservation efforts. Perfect for… 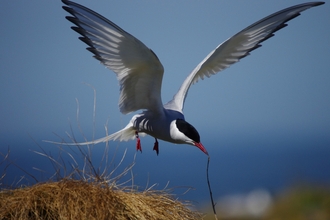 During the summer, five species of tern return to nest on UK shores, islands, and inland reservoirs. Visit one of our nature reserves…