Scientific name: Phasianus colchicus
A handsome gamebird, the pheasant is an introduced species that has settled here with little problem. It can be spotted in its farmland and woodland habitats, although you'll probably hear the loud, croaking call of the male before you see it.

A very familiar gamebird, the pheasant is large and colourful, and has a long tail. Common in farmland and woodland throughout the UK, the males' loud, sharp, croaking call can be heard resonating through the countryside before the bird is actually seen. Pheasants eat seeds, berries, leaves and insects; they roost in trees and can form flocks in winter. During the breeding season, one male may mate with many females, who then raise the chicks alone.

Male pheasants have striking bronze plumage, a red face and wattle, a green neck with a white ring around it and a long tail. Females are sandy brown, with an intricate pattern of black spots and bars. Pheasants are larger than partridges and have longer tails.

Pheasants are native to Asia, but were introduced into much of Europe by the Romans, possibly arriving in the UK with the Normans in the 11th century. Largely forgotten and locally extinct up until the 19th century, they became a popular gamebird once again and are extensively reared by gamekeepers.

The Wildlife Trusts record and monitor our local wildlife to understand the effects of various factors on their populations, such as the introduction of new species. You can help with this vital monitoring work by becoming a volunteer - you'll not only help local wildlife but learn new skills and make new friends along the way. 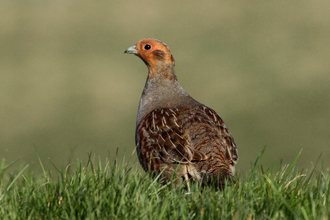 The grey partridge is an attractive bird that prefers the ground to pear trees! Found on farmland and grassland, it is under threat from… 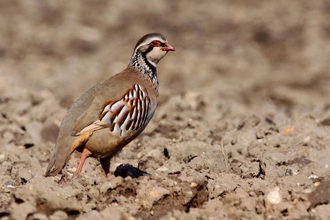 A plump gamebird, the red-legged partridge is an introduced species that seems to have settled here with little problem. It can be… 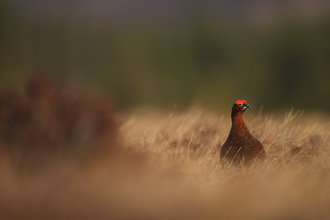 Find out where and when to see grouse around the UK. See fascinating and comical territorial behaviours as they defend their patches and…