Scientific name: Plectrophenax nivalis
Only a few pairs of snow bunting breed here, so look out for this striking black-and-white bird in winter around Scotland, the North West and the East coast of England.

Classified in the UK as Amber under the Birds of Conservation Concern 4: the Red List for Birds (2015).Protected in the UK under the Wildlife and Countryside Act, 1981.

The snow bunting is a sparrow-sized bird that breeds in the Arctic (from Scandinavia to Canada), and winters in the UK, mainly around the coast. There are also some resident snow buntings in the UK, which breed in Scotland. Snow buntings build their nests in rock crevices on bare mountain slopes or rocky shores and lay four to six eggs.

Breeds in small numbers in the Scottish Highlands. Winters around the coasts of northern and eastern UK.

There are about 60 pairs of resident snow buntings that breed in Scotland. In winter, they are joined by 10-15,000 visiting birds. 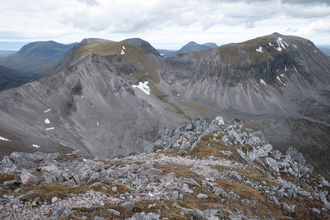 Rocky habitats are some of the most natural and untouched places in the UK. Often high up in the hills and hard to reach, they are…