Scientific name: Rana temporaria
Our most well-known amphibian, the common frog is a regular visitor to garden ponds across the country, where they feast on slugs and snails. In winter, they hibernate in pond mud or under log piles.

Common. Protected in the UK under the Wildlife and Countryside Act, 1981

Common frogs are amphibians, breeding in ponds during the spring and spending much of the rest of the year feeding in woodland, gardens, hedgerows and tussocky grassland. They are familiar inhabitants of garden ponds, where they lay their eggs in big 'rafts' of spawn. They feed on a variety of invertebrates and even smaller amphibians.

The common frog varies in colour enormously, from green to brown and even red or yellow. It has smooth skin, a dark 'mask' behind the eye and long back legs, covered in dark bands. It hops and jumps rather than walks, and lays spawn in large jelly-like clumps.

Found throughout the country, except for some Scottish islands, some of the Isles of Scilly and the Channel Islands.

Male common frogs have 'nuptial pads' on their front feet to help them grip on to females during the breeding season. The male frog will wrap itself around the female and fertilise her eggs as they are produced; a female frog may lay up to 4,000 eggs in one spring! Frogs can spawn as early as December or as late as April depending on the weather. After hatching, tadpoles take about 14 weeks to metamorphose into froglets. 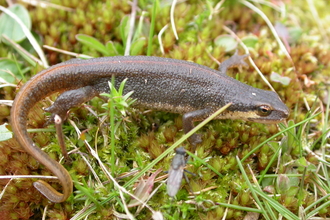 The palmate newt looks similar to the smooth newt, but favours shallow pools on acidic soils like heathlands. During the breeding season… 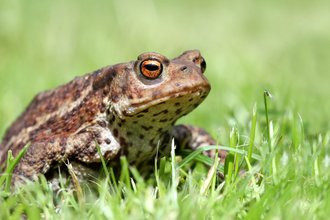 Despite its warts and ancient associations with witches, the common toad is a gardener's friend, sucking up slugs and snails. It is… 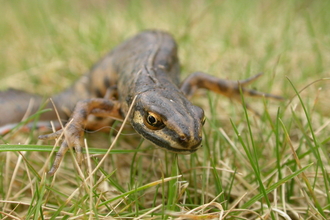