The Wildlife Trusts call on government: invest in medicine not marksmen

The government has given permission for badger culls to go ahead in England for another year. This year, badgers are now at risk in Staffordshire and Cumbria, in addition to the existing areas of Gloucestershire, Somerset, Dorset, Cornwall, Devon, Herefordshire, Cheshire and Wiltshire.

The Wildlife Trusts believe that the government’s strategy is flawed because bTB is primarily a cattle problem, not a wildlife one[1] and makes no sense at a time when a review of the government strategy which drives the culls – the bovine TB eradication strategy – is still underway[2]. Only 1 in 20 cases of bTB herd infections are transmitted directly from badgers [1], thus, culling badgers is not the answer and it is also counterproductive. Culling disrupts badgers’ social structure, causing them to move around more frequently and over longer distances – which can result in increased bTB transmission.

The Wildlife Trusts have opposed badger culling for well over a decade and most recently have written to Secretary of State, Michael Gove, to highlight the flaws of the badger cull and request that the cull be ended in favour of strategic and widespread badger vaccination schemes, and to invest in developing a cattle vaccine. Yet again, this has not happened.

The costs of killing badgers are much higher than vaccinating them.

Ellie Brodie, Senior Policy Manager, The Wildlife Trusts says:
“It is unacceptable that the government has not waited for the results of their own review – which we understand is to be published imminently – before forging ahead with another year of ineffective and expensive badger culling. The badger cull is a dangerous distraction from addressing the main route of bTB transmission in cattle which is between cattle[1].

“The Wildlife Trusts have been involved in this debate for over ten years. In 2008 we successfully persuaded the Labour Government not to go ahead with a badger cull. In 2012 we helped stop the initial badger cull pilot in Somerset and Gloucestershire. Simultaneously, we have led the way in demonstrating that badger vaccination would be a far more effective route, accompanied with strict biosecurity controls, movement controls and robust cattle testing regimes.

“We’re calling on the government to invest in medicine, not marksmen. The costs of killing badgers are much higher than vaccinating them – it costs £496.51 to kill a badger compared with £82 to vaccinate a badger” [3,4].

Research has found that bTB bacteria can survive for months either on fields or in slurry[5]. Strict biosecurity procedures are key to tackle this key route of the spread of bTB. Defra should provide as much support as possible to farmers to make sure these procedures and rigorous tests are in place. This approach would contribute considerably to reducing the spread of bTB between cattle and badgers.

bTB can have a devastating impact on the lives of farmers. The Wildlife Trusts continue to work with farmers to find solutions that work for everyone. Badger vaccination is cost-effective, and it works. It reduces the incidence, severity and long-term vulnerability of badger groups to the disease[6]. If government strategy must focus on badgers, this approach offers a far more effective, cheaper and low-risk way to reduce bTB in badger populations.

The government has promised to leave the environment in a better state for the next generation. Continuing and expanding the badger cull runs counter to this promise and risks pushing one of our protected native species to the verge of local extinction.

The Wildlife Trusts call on the government to:

The Wildlife Trusts are urging people to write to their MPs asking them to help stop the cull. (Find MPs here.)

You can find out more information on our website here.

Badger vaccination currently costs on average £82 per badger[3], while latest figures suggest it costs the state £496.51 per badger culled (not including costs incurred by the land owner)[4].

*A global shortage of the BCG vaccine resulted in a suspension of badger vaccination projects in Wales and England for 2015 and 2016. Three Wildlife Trusts resumed vaccination programmes in 2017.

Whilst vaccination doesn’t cure a badger of bTB it does slow the progression of the disease in an individual animal and lowers the likelihood that the infection will be passed on. Badger vaccination can reduce the chance that a badger will test positive for bTB by as much as 76%[3]. The Wildlife Trusts welcome the Government’s announcement that there will be enough supplies of vaccine to allow Defra’s Badger Edge Vaccination Scheme to resume in 2018.

The Department for Environment, Food and Rural Affairs, Defra, has granted licenses in England to cull badgers where there’s a high, medium and low risk of cattle being infected with bTB. Badgers are being culled because they can carry bovine Tb and pass on the disease to other animals; however, badgers are not the main route of infection for farmers’ herds - that comes from cattle to cattle contact. There are now 32 cull zones in at least the following counties: Cornwall, Devon, Dorset, Wiltshire, Gloucestershire, Herefordshire, Cheshire, Somerset and Staffordshire. This includes one cull zone in the Low Risk Area in Cumbria.

[1] Badgers are responsible for around 6% of all new bTB breakdowns in cattle. See: Donnelly, CA & Nouvellet, P., 2013. The Contribution of Badgers to Confirmed Tuberculosis in Cattle in High-Incidence Areas in England. PLoS Currents: Outbreaks. http://currents.plos.org/outbreaks/article/the-contribution-of-badger-to-cattle-tb-incidence-in-high-cattle-incidence-areas/

[2] Charles Godfray was asked by Defra to chair the bovine tuberculosis (bTB) Strategy review. The aim of this review is to “reflect on progress being made with implementation of the bTB Strategy and consider how to take the Strategy to the next phase.” The review began in March and is due to be completed by the end of September 2018.

[3] The cost per badger of vaccination by Wildlife Trusts was calculated using data from 2015 which is the most recent data available. Wildlife Trusts vaccinated 949 badgers, which cost a total of £78,042.25. Cost per dose is £82

[4] The cost of the cull per badger in England was calculated using figures from the badger cull in 2016. Figures for costs to government and the police† was divided by the number of badgers culled††. This gives a cost per badger of £496.51.

Last week George Eustice MP, Minister of State (Department for Environment, Food and Rural Affairs), announced that the badger cull will go ahead for another year in England, despite ours and many others’ long-running campaign to halt the cull [1]. We were dismayed to learn that a further 11 badger cull zones had been licensed, bringing the total number of badger cull zones to 32. The longest-running of these areas are in Gloucestershire and Somerset where culling has been going on since 2013, and where supplementary licenses were granted in 2017.

It is from data in these counties – Gloucestershire and Somerset - that the government justify their expansion of the cull. In his announcement, Eustice quoted figures from a recent report and linked a reduction in bTB in these counties with the culling of badgers. This is in spite of the report being clearly caveated – the report itself states that the data alone “cannot demonstrate whether the badger control policy is effective in reducing bovine TB in cattle.” [2] This comes before statistical analysis could be carried out to draw any links between culling in the counties and bTB incidence.  This means that any reduction in bTB in Gloucestershire and Somerset could be down to other factors – from improved testing regimes to more effective cattle movement controls. We join renowned scientist Rosie Woodroffe [3] in asking why the government felt it could use these figures to mislead the public in demonstrating the success of their badger cull?

Robust scientific evidence is still lacking to support the badger cull, yet over 24,000 badgers are still due to be culled in 2018 [4]. Only 1 in 20 cases of bTB herd infections are transmitted directly from badgers [5] - culling badgers is not the answer, and it is also counterproductive. Vaccinating badgers slows the progression of the disease in an individual animal and lowers the likelihood that the infection will be passed on [5]. Therefore, we’re reiterating our call on the government to invest in medicine, not marksmen.

[1] See our most recent press release on the expansion of the cull here: https://www.wildlifetrusts.org/news/flawed-badger-cull-expands-across-england

[3] See a breakdown of the findings on Rosie Woodroffe’s Twitter feed here: https://twitter.com/RosieWoodroffe?lang=en

[5] Badgers are responsible for around 6% of all new bTB breakdowns in cattle. See: Donnelly, CA & Nouvellet, P., 2013. The Contribution of Badgers to Confirmed Tuberculosis in Cattle in High-Incidence Areas in England. PLoS Currents: Outbreaks. http://currents.plos.org/outbreaks/article/the-contribution-of-badger-to-cattle-tb-incidence-in-high-cattle-incidence-areas/

Donate to a badger vaccination appeal 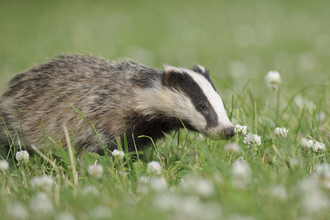 Badger vaccination in Derbyshire has been made possible because of donors like you. 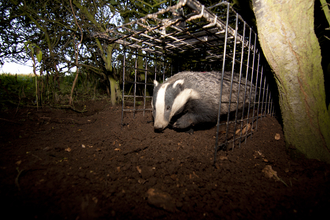 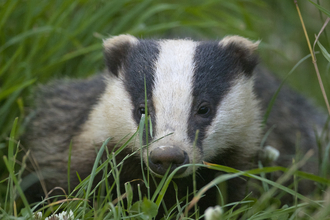 The Wildlife Trust for South and West Wales 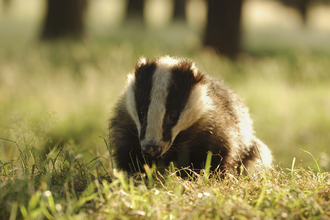 We need your help to fund our badger vaccination programme - to pay for essential veterinary supplies, equipment and staff training. 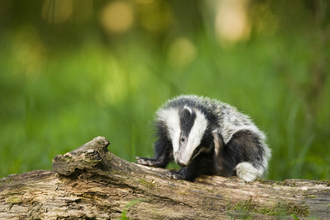 Nottinghamshire Wildlife Trust is working to prevent the spread of devastating bovine TB in the area. 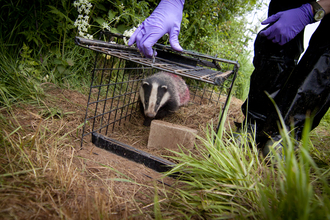 Sussex Wildlife Trust want to vaccinate all the badgers on our nature reserves in the high risk area, and adjoining land where possible.

The future of Cornwall’s badger population is far from clear. Help us raise funds to run a prospective badger vaccination project. 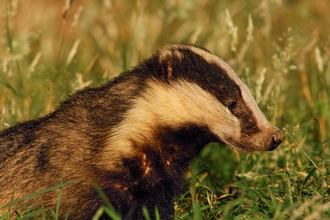 Donations will help the Trust plan and deliver a programme of work which aims to vaccinate local badgers and promote improved biosecurity. 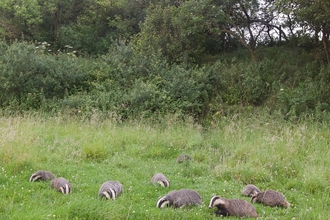 We need to raise at least £20,000 to afford to extend our badger vaccination work.