Meadow buttercup is a widespread and common perennial in meadows and pastures, and is also found in parks, gardens and at woodland edges. It prefers slightly damper, calcareous sites, where it can grow so dense that it forms yellow meadows that dazzle in the sunshine. It flowers between April and October.

Meadow buttercup has yellow flowers, about 2cm across, that comprise five, shiny petals. It has rounded leaves, divided into three to seven lobes, and does not possess the runners of Creeping Buttercup.

Meadow buttercups can become common in grazed pastures because they are poisonous to grazing animals, so are avoided; they have a chemical called protoanemonin in their sap.

The Wildlife Trusts manage many grassland and woodland habitats sympathetically for the benefit of all kinds of wildlife. Careful grazing with traditional breeds, hay-cutting at the right time, scrub clearance and coppicing are just some of the ways grasslands and woodlands are kept in good condition. By volunteering for your local Trust you can help too, and you'll make new friends and learn new skills along the way. 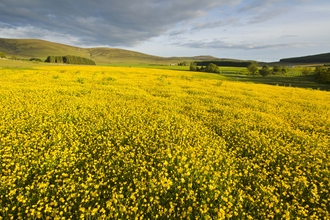