Scientific name: Aegopodium podagraria
Ground-elder was likely introduced into the UK by the Romans and has since become naturalised. A medium-sized umbellifer, it is an invasive weed of shady places, gardens and roadsides.

Ground-elder was probably introduced into the UK from continental Europe in Roman times for use as a medicinal and culinary herb; it soon became established as a pernicious weed of gardens, shady areas and cultivated ground. It is a perennial, so doesn't die over winter and mainly spreads by rhizomes, although it does seed. It can quickly spread, carpeting an area and outcompeting other plants for resources. Compact umbels (umbrella-like clusters) of white flowers appear between June and August and are attractive to a range of insects.

Ground-elder has leaves with three lobes, like a pointed clover-leaf, at the base of its stems. It displays rounded, umbrella-like clusters of small, white flowers.

The roots of ground-elder delve notoriously deep into the soil and can be hard to get rid of, hence the common name of 'Devil's guts'. 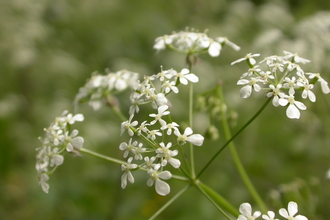 The umbrella-like clusters of white, frothy flowers of cow parsley are a familiar sight along roadsides, hedgerows and woodland edges.… 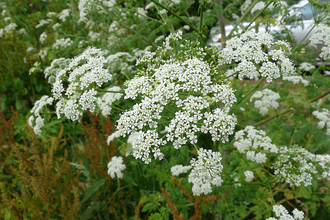 A notoriously poisonous plant, hemlock produces umbrella-like clusters of white flowers in summer. It can be found in damp places, such… 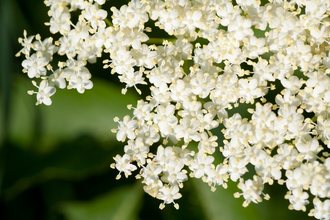 Elder is an opportunistic shrub of woods, hedges, scrub, waste and cultivated ground. Its flowers and berries are edible, but it's…