Oyster drills are whelks, living below the low tide mark down to depths of 150m. Surprisingly enough, the oyster drills favourite food are oysters! They feed by boring through the oyster shells with their sharp proboscis.
Oyster drills are native but there's an invader on the Kent and Essex coasts... the American oyster drill has been recorded there. This non-native species also feeds on our native oyster beds.

The oyster drill is unmistakeable, being much rougher and more jagged in outline than any other whelk. It is yellow or white in colour, with brown markings. The shell is tall, with an angulated spire and coarse/rigid whorls, which can feel sharp to the touch. The siphonal canal is closed to form a tube in older animals.

Found on rocky shores predominately in the west and south west of the UK. They are usually seen on rocks and under stones to depths of 150m but are also found on the lower parts of sheltered rocky shores in the summer.

The oyster drill is also known as the 'sting winkle' or 'rough tingle'. The common name ‘oyster drill’ comes from the fact that they prey on young oyster spat, using their tongue to drill through the oyster shell, before slurping the insides up like a smoothie! 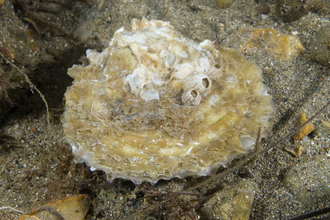 Native Oysters are a staple of our seas and our plates - but our love of their taste has lead to a sharp decline all around the UK. 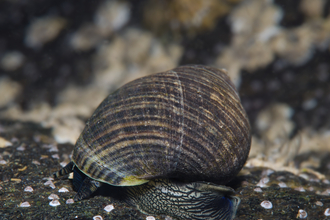 Edible periwinkles are a common sight when rockpooling and can be found in huge numbers on the shore. 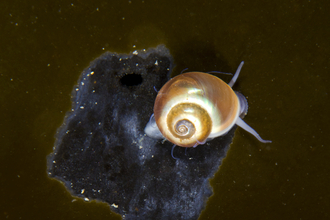 These little sea snails are found amongst the seaweed on rocky shores around much of the UK. They come in lots of different colours,…