Scientific name: Chrysaora hysoscella
It's easy to see where the compass jellyfish got its name – its brown markings look just like a compass! They may look beautiful – but they give a nasty sting so keep your distance.

With brown marking reminiscent of a compass, this jellyfish is really quite distinctive. A summer visitor to our shores, the compass jellyfish feeds on small fish, crabs and even other jellyfish. They give a nasty sting, so if you spot them during a visit to the beach – look, but don’t touch! Once they have stung something, jellyfish often leave the tentacle behind and can continue to sting using it even when not to connected to their body.

A translucent yellowish-white jellyfish with brown markings around the fringe and on the top of the bell. Those atop the bell resemble a compass, with V shapes radiating out from a central point. They have a bunch of frilled oral arms below the bell and long thin marginal tentacles around the fringe of the bell.
Don't get too close to those tentacles though, they give a nasty sting.

Common off Southern and Western coasts of Britain in summer months.

Young fish can often be seen swimming around the compass jellyfish's tentacles, giving them protection from predators. We're not yet sure why they don't get stung and eaten by the jellyfish though! 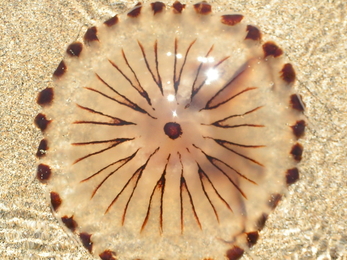 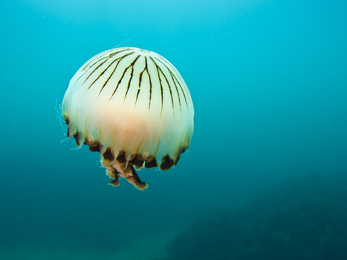 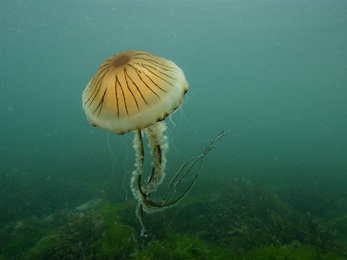 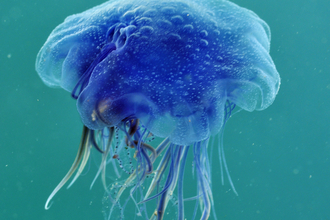 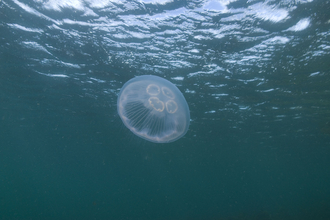 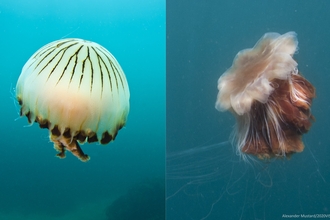