Scientific name: Nerophis lumbriciformis
The last thing you’d expect this extraordinary creature to be is a fish!

April-October. Egg carrying males can be seen from May-August.

Its small, round, smooth body makes it look much more like a worm than a fish, hence the name ‘worm’ pipefish. The only resemblance to a fish is one very small, delicate dorsal fin, which sits behind the head and extends for only a few centimetres. These pipefish like to eat small crustaceans such as copepods and are only usually found in rockpools and seaweed habitats on the shore.

Very easy to mistake for a piece of seaweed or a twig when found stranded under a rock, this pipefish usually has a dark olive, glistening body. They can grow up to 15cm long but are only about a centimetre thick! Look for an upturned seahorse type snout and beautiful light green markings around the eyes and face.

As with its close relative, the seahorse, it is the male pipefish which carries and cares for the eggs. Unlike the seahorse who carries the eggs inside a pouch, the pipefish will carry them stuck to a small groove on the outside of their tummies!

Like many other species in the ocean, pipefish mate for life, so it is especially important when rockpooling to follow the Seashore Code and put them back in exactly the same place you found them 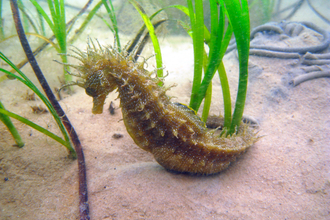 One of 2 seahorses found in UK seas, long snouted seahorses are recognisable by their longer snout and fleshy "mane". 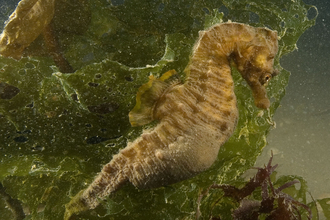 One of 2 seahorses found in UK seas, short snouted seahorses are recognisable by their shorter snout - surprisingly enough!