Scientific name: Leucoraja naevus
It’s easy to identify this distinctive skate from the black and yellow marbled eye spots on each wing.

The cuckoo skate is listed as Least Concern by the global IUCN Red List assessment but is categorised as Vulnerable in Ireland.

Present all year round

The cuckoo ray is able to feed on small crustaceans and worms, and sometimes fish using the crushing plates that replace teeth in its mouth. Young cuckoo rays are more commonly found further offshore, whereas adults are often found close to shore.

Although it is commonly called the cuckoo ray, it is actually a species of skate (sometimes known as the cuckoo skate). Skates and rays are closely related and look similar, but you can spot the difference by looking at the tail. Skates have a short tail with small fins and no stinging capabilities, whereas rays have a long whip-like tail.

The cuckoo ray is easily recognisable due to the black and yellow marbled eye spots on each wing. Four rows of thorns run down its lower back and along its tail.

Found in the warmer waters in the Northeast Atlantic and Mediterranean; UK coastlines represent the most northerly limits of the range of this species.

The cuckoo ray lays between 70 to 150 eggs per year. These eggs are commonly called ‘mermaid’s purses’ and empty ones can be found washed up along the shore line. 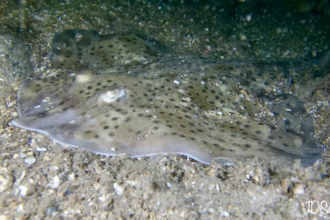 The spotted ray is one of the smallest species of skate, growing to only 80 cm. 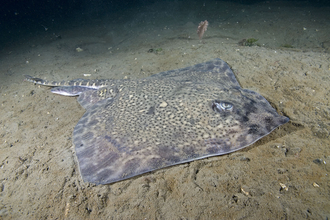 The most commonly encountered ray around the British Isles, it's easy to see where the thornback ray got its name from - just check… 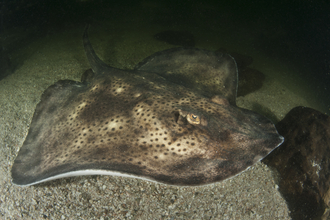 This large skate has tiny, prickly spines all over its back.